Hofstra Women’s Club Lacrosse honored the memory of former coach Marc Sieben, who passed away in July of 2014, with their annual alumni game on Sunday, November 15th.

The event was a favorite of Sieben's, and had an excellent turnout this year. On this occasion the older generation showed the younger players how it’s done, walking away with a 15-6 victory.  In addition to their alumni game, the team-along with Men’s Club Lacrosse- participated in Hofstra’s Annual Shake-a-Rake community service program on Saturday, November 14th.

Hofstra Club Ice Hockey took to the rink in Great Neck, New York, on Saturday. November 14th, to take on the U.S. Merchant Marine Academy. With 14:20 left on the clock in the first period, Hofstra’s Jamie Esperto put Hofstra on the board with an unassisted goal to take a 1-0 lead. Kings Point answered with two goals to take the lead 2-1, but Hofstra's Eli Vaillancourt answered right away to tie the score at 2-2. Darren Schwartz and Brandon Fauci would add goals for the Pride, but it wasn't enough, as the Mariners pulled away to win 7-4. Alex Feinstein had 46 saves in goal for the Pride.

Hofstra Women’s Club Ultimate Frisbee traveled to Stony Brook University on Saturday, November 14th, for a friendly with their Long Island rivals. Despite missing some key players, the Pride managed to get 8 points on the board and get some valuable experience for some of their younger players. Unfortunately, it wasn't enough to match Stony Brook’s 13 points, but the team is looking forward to their spring rematch with the Seawolves.
Hofstra’s 29 Club Sports are always looking for new members and welcome all experience levels.  If you would like to find out more information about joining one of our clubs, please visit hofstra.edu/recreation and click on the ‘Club Sports’ tab, or feel free to visit us at the Hofstra Fitness Center with any questions you may have!


Hofstra Women’s Ultimate Frisbee traveled to Princeton, New Jersey, on Saturday, November 7th, to participate in the annual Fall Brawl Tournament. The team played 6 games over the course of the weekend, accumulating a superb 5-1 record, with wins over Cornell, Columbia, Temple, Buffalo, and The College of New Jersey. On Saturday, a Callahan point was achieved in each game: one by junior Kelsey Kresge, one by senior Erin Hadden, and one by senior Lauren Curlett. A Callahan point refers to an instance in which the opposing team has the disc intercepted in their own end zone. Senior Madi Scheffer played great defense throughout the weekend, intercepting the opponent's disc on various occasions and leading the defensive effort for the Pride. Sophomore Emily Meredith had a stellar attacking performance, dominating the end zone and scoring multiple goals.

Hofstra Men’s Ultimate Frisbee made the voyage to Newton, Pennsylvania for a tournament on Saturday, November 7th.  After a somewhat slow start on Saturday - tallying a 2-2 record – the Pride came out strong on Sunday, achieving a huge win against Penn State. Next up was Stevens University, against whom Joseph Murphy cut in the end zone late to catch a perfect scoober pass for a score to secure the win for the Pride. In what turned out to be the match of the day, MIT came out strong and matched Hofstra point for point for much of the game. With time winding down, Spencer Riggins caught a full field deep huck from Gabriel De Oliveira to claim an exhilarating 11-10 win for Hofstra. Heading to the championship bracket, the Pride was pitted against Long Island rivals Stony Brook University. Despite a valiant effort, Hofstra fell to the Seawolves, but still managed an impressive 5-3 record on the weekend.

Hofstra Club Baseball traveled to Boston University for a three game series on Saturday, November 7th.  The Pride dropped game one 4-2, but managed to take the series by winning game two 9-3, and taking the rubber match 9-6. The team received strong pitching performances over the course of the weekend from PJ Potter, Justin Cusano, and Joe Zapata.  The team also benefited from strong hitting performances courtesy of Justin Cusano (5-13 with 3 doubles), Sean Cunningham (4-9 with 2 doubles) and Ben Lawlor (four hits, including a home run). Freshman Tyler Symington also collected four hits over the weekend while being a reliable backstop for the Pride all weekend long. 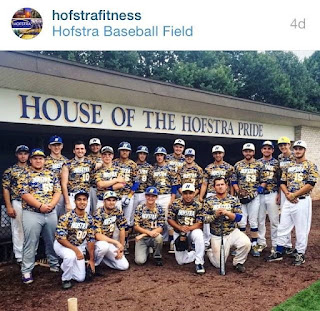 Hofstra Club Ice Hockey matched up against Yale University-the 2nd place team in the Metropolitan College Hockey Conference-on Saturday, November 7th at Ingalls Arena in New Haven, Connecticut. Yale rushed out to a 4-0 lead before Andrew Gagnon finally broke the ice for the Pride 9:26 into the second period after some nifty passing from Guiseppe Chiaravalle and Brandon Fauci. David Craig scored the Pride's second goal, assisted by Darren Schwartz and John Voilkis, before Gagnon added his second goal of the night, but it wasn't enough as Yale prevailed 13-3. Hofstra goalie Tom Calcagno battled hard against a barrage of 71 shots, stopping 58 of the shots he faced.

Posted by Shaun Fean, Associate Director of Campus Recreation at 11:46 AM 0 comments


The Hofstra Roller Hockey Club traveled to New Cumberland, Pennsylvania on Saturday, October 31st as the Division 1 team played games against Temple University, Slippery Rock University, and West Chester University. The Pride fell to Temple in their first game, despite a strong performance in net from Brian Sweeney, who notched 25 saves. Jordan Domnitch scored the lone goal for Hofstra. Against Slippery Rock, the Pride raced out to a 3-1 lead, but eventually dropped an 8-3 decision. Connor Hurwitz, Jordan Domnitch, and Nigel Grove all scored for the Pride in the loss. In the final game of the day, the Pride managed their first win of the season defeating West Chester 5-4. Nick Lewis led the way with 2 goals and 2 assists, and Daniel Correia chipped in with a goal and 2 assists of his own. Goalie Ryan Smith made 29 saves in net, many in spectacular fashion.

The Hofstra Ice Hockey Club took on Fordham University on Friday, October 30th at Twin Rinks at Eisenhower Park in East Meadow, New York. Although the Pride fell to the powerful Rams 10-3, the loss was something to build on, as they managed to score more goals than any team has all season against the perennial championship contenders. Hofstra's Nick Lewis, assisted by Guiseppe Chiaravalle, opened the scoring just 23 seconds into the first period to give the Pride a surprising 1-0 lead. However the depth of Fordham was too much for Hofstra to handle, as the Rams peppered goalie Alex Feinstein with 62 shots on goal, 10 of which found the back of the net. Chiaravalle added a goal of his own later in the third period, as did Jamie Esperto, who capped the scoring for the Pride. Next week Hofstra travels to Yale’s Ingalls Arena in New Haven, Connecticut on Saturday, November 7.

The Hofstra Quidditch Club traveled to Rochester, New York, on Saturday October 31st for the Northeast Regional Championship. The Flying Dutchmen started the tournament with wins over Harvard University and the University of Rochester, but unfortunately fell one game shy of qualifying for US Quidditch Cup IX in April 2016, following an intense match-up with Boston rivals Emerson College. The team did however nab the first alternate spot, meaning that if another team drops their bid, the Flying Dutchmen will get that spot. 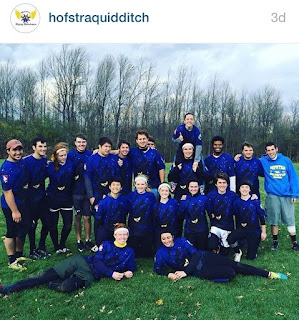