After a valiant championship journey, Hofstra Women’s Rugby Club fell to Vassar in the semifinals of the Tri-State Rugby Conference tournament on Sunday, October 26th. The final score of the match was 27-17, but this is not the end of the road for the team’s 2014 campaign, as they will take on Marist this weekend for third place. The winner of that game can apply for an at large bid to nationals – good luck HUWRC!

On Sunday, October 26th, Hofstra Men’s Club Lacrosse played host to Loyola, SUNY Cortland, and Sacred Heart in a Round Robin Tournament. A highlight of the day was the Pride’s 6-5 win over Cortland in a very exciting overtime battle, concluding with a winning goal from Billy Giannaras.
Hofstra Equestrian enjoyed a successful home show on Sunday, October 26th at Country Farms in Medford, NY. Julissa Hoogeven rode beautifully in the intermediate division earning a 2nd place ribbon in both of her classes. Among a large handful of ribbon-worthy performances for HUEC, Kierstin Berwick won her novice over fences class and earned a 3rd place in her first intermediate flat class.

Hofstra Quidditch traveled to Boston on Saturday, October 25th for the weekend long Northeast Classic. The Flying Dutchmen finished pool play on day one (2-2) with wins over Clark University, and four year Northeast Regional Champions, Boston University. Hofstra’s pool was considered the “pool of death”, but the team managed to place 3rd out of 5. Despite being short-handed, Hofstra kept up with Northeast heavyweights Tufts and RIT before falling to them both by one snitch catch. The day ended with a 170-60 win over Boston Riot. Day Two began with a tough defeat at the hands of QC Boston: The Massacre, which sent the Pride into the second tier championship bracket. There, Hofstra beat Harvard 110-70, and went on to face Emerson College where they were eliminated by a snitch catch. HUQC ended the NE Classic (4-4).

On Saturday, October 25th, Women’s Ultimate Frisbee traveled to Newark, Delaware for three tough games against the University of Delaware, Haverford College, and the University of Maryland. The Pride came away with a13-2 win against UDel, but dropped their two other games. On Sunday, the team defeated Temple, but suffered losses in their three remaining contests. The team will next be in action at the Fall Brawl Tournament, which will take place at Princeton University on the weekend of November 11th.

Hofstra Club Baseball made the trip to Philadelphia to take on Drexel on Saturday, October 25th.  The Pride ended the weekend (1-2) officially, although the second game is currently under protest. Joe Zapata pitched a 2-hit shut out in game one of the series, and Ben Lawlor had standout performances in all three games.

Hofstra Club Billiards met at Baldwin Billiards on Sunday, October 26th for a series of matches. The club’s entry of Team Cruchaga came out victorious in two matches.

For information on how to get involved with any Hofstra club sports, visit our website: www.hofstra.edu/recreation and click the ‘club sports’ tab. See you next week!

Posted by Shaun Fean, Associate Director of Campus Recreation at 10:52 AM 0 comments


Hofstra Women’s Rugby had their most important game of the season on Sunday, October 19th, hosting the University of Albany in the conference championship qualifier. Coming off of back to back tough losses, the Pride rallied together in spectacular fashion and earned their spot in the semifinals with a 36–31 win.


Hofstra Ice Hockey hosted Suffolk County Community College in an exciting match up at their new home rink at Twin Rinks at Eisenhower Park on Saturday, October 18th. The atmosphere was lively as both the Hofstra Dance Team and Hofstra mascot ‘Kate” were in attendance to support the Pride. The home side took an early lead and maintained it, holding a 4-2 lead entering the third period. Suffolk’s depth off the bench proved to be the difference between the sides, and the Sharks came away with a 7-4 victory, following a flurry of goals in the last 10 minutes of play.
Click here for Hofstra Ice Hockey Video

Hofstra Crew sent two boats to the biggest race in the world, the Head of the Charles, in Boston, Massachusetts. The Pride sent a varsity women’s 4+ boat with Ashley Wilson, Bianca Pickering, Amanda Korbar, Alex Alicea, and Katie Navarino. The women placed 55th out 61 with a time of 22:25. The Men’s double entry of Billy Trotter and Steven Hartman, placed 29th with a time of 21:22.
Women’s Club Lacrosse wrapped up their non-league portion of their schedule with matchups against Stony Brook, Fordham and NYU at Stony Brook on Sunday, October 19th. The Pride fell short to Stony Brook and Fordham but came away with a 7-3 win over NYU.

For information on how to get involved with any Hofstra club sports, visit our website: www.hofstra.edu/recreation and click the ‘club sports’ tab. See you next week!

On Friday, October 24th eight Hofstra Students attended the MaryBrennan Interfaith Nutrition Network (INN) Luncheon.  Hofstra students were among 300 plus in attendance.  This annual lunch acts as one of the primary fundraisers for the Mary Brennan INN, an organization that provides food and shelter for the homeless and hungry in Long Island.  Students who attended have volunteered at the Mary Brennan INN through Hofstra Discovery Program, AlternativeSpring Break, and with student clubs Habitat for Humanity and Hofstra’s NewmanClub. 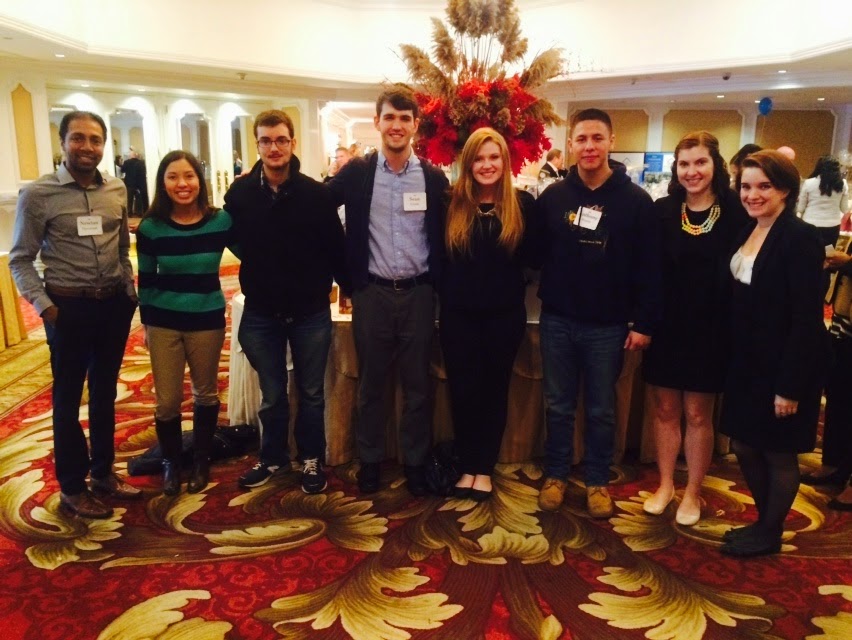 Last Saturday Hofstra’s Student Government Association planned and attended a one day retreat to work on team building and planning for the 2014-2015 academic year.

We started the day off bright and early, boarding our two yellow school buses and departing from the student center at 8:30 a.m. with water bottles, fruit, and granola bars to energize us on our one day adventure. The staff at Project Care met us at the gate with a warm friendly welcome and we dove right in to teambuilding activities. First we broke up into three groups and challenged ourselves on low ropes courses. Each course was different but the theme was constant: using communication and teamwork to achieve a common goal. We took a short break for some delicious pizza and salad and then we jumped into the high ropes course. This course was more physically and mentally difficult than the first course, but the members of SGA welcomed the challenge! The Project CARE staff wrapped up our activities and provided us with takeaways.

The second half of the retreat brought us back to Hofstra. We regrouped with an energizing activity and then got down to business. SGA students brainstormed ideas, engaged in productive discussion, and worked as a team. Overall the retreat was a huge success and a bonding experience for all!
Posted by S. Cherian at 9:09 AM 0 comments