The Cinderella Day for a Brazilian Tomboy by Sara Mendes Campolina


Once upon the time there was a kingdom called Soccer land, and its king was the best soccer player that had ever kicked a ball: the king Pelé. His kingdom was so powerful that it ruled entire countries, such as Brazil. Over there life was different, it flowed like the rhythm of Samba. Soccer was reinvented daily with creativity and without excuses. The ball could be made out of socks, the distance between two flip-flops could become the goalpost and the field could be any empty space. The only thing that never changed was the owner of the crown. Pelé could not come from another country and neither could I! 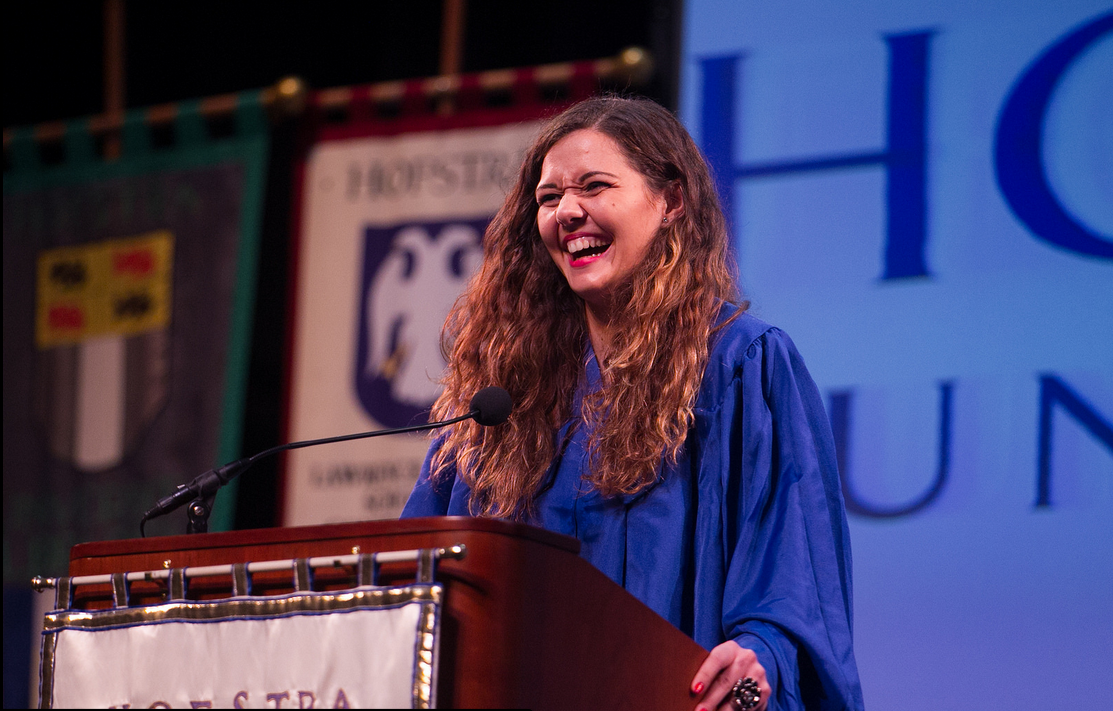 Pelé does not need an introduction; however, I do! My name is Sara, a Brazilian volleyball player graduating from Hofstra next month. For those who are not familiar with Brazilian customs, it is common to receive a soccer ball as one of your first gifts. As a child, your first steps would be chasing a soccer ball while holding your parent’s hands. Of course, every tradition has exceptions... But I was not one of them! I grew up playing soccer against my dad in the garage of my house, and in there was the first time that I heard about Pelé. My dad told me about the World Cup titles that Pelé won, about his gingado (fun way to play with the ball), dribbles, and all the stories about the owner of the yellow number 10 jersey. Pelé sounded so exciting to me that I even thought he was the man who created soccer. Indeed, he may not be the inventor, but he is definitely the genius responsible with lighting up the soccer pride inside all of the Brazilians. Well, if you are not convinced yet… He won his first World Cup at the age of seventeen! Just think of what you were doing at this age. I doubt it would be getting ready to win a World Cup! 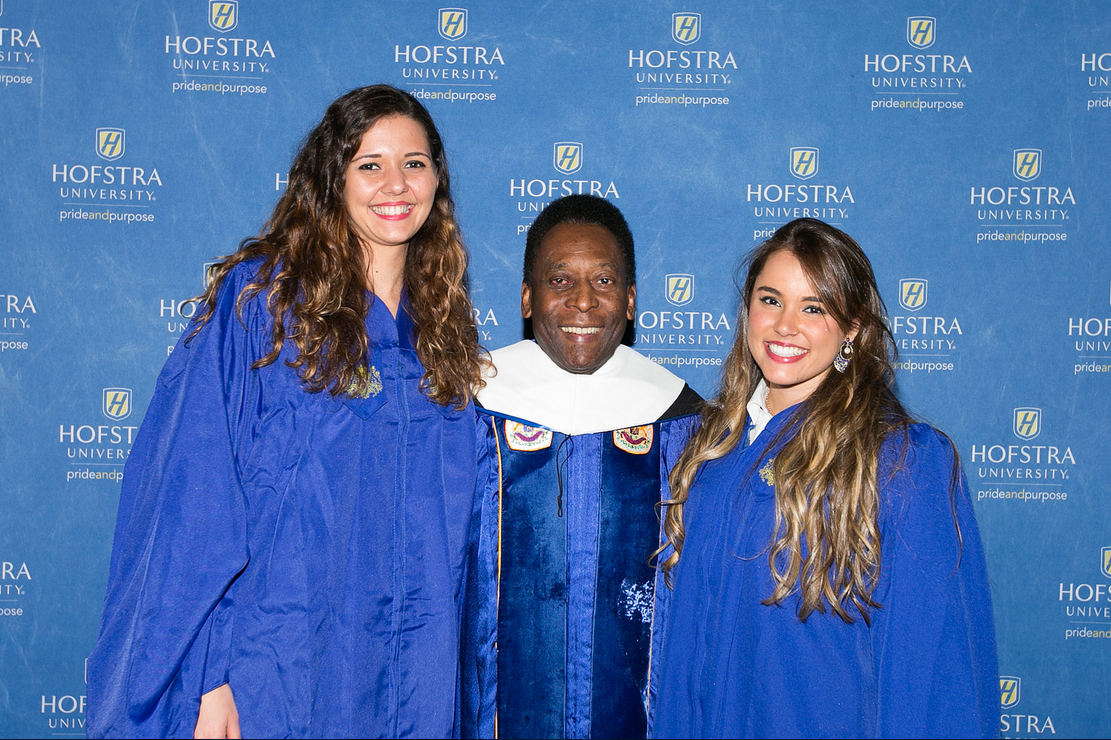 When I found out that the king was coming to Hofstra to receive his honorary degree, I was very excited; I knew that I was in the right place at the right moment! A few weeks later, the news got even better. I received an invitation from the organizers of the event, Dr. Stanislao Pugliese and Dr. Brenda Elsey. They were asking me to introduce Pelé at the ceremony! It took me a while to realize what was about to happen. The organizers also asked me about my friend Hannah Gomes, a Brazilian freshman studying pre-Med at Hofstra, and it instantly gave me a good feeling by knowing that she would be sharing the pressure of representing Brazil on the stage with me. When we met for the first time after we had received the news, we simultaneously asked each other, “What are you going to wear?” The solution for our girl problem came from the organizers, when they told us that we were going to wear robes over our clothes. It was not fashionable, but it definitely was very useful to hide the sweat when we shook hands with Pelé backstage.

Then we asked each other what we were going to say; however, the answer for this question took us a long time and a few drafts until we finally figured it out, while dealing with the problem of being foreign students. Indeed, the only thing that was not questionable was the excitement of meeting the legend Pelé! We waited anxiously for April 11 and our Cinderella Day finally came. It was an experience of a lifetime and the proof is in the selfie that I took with him, along with Hannah’s autographed Brazilian national team jersey. We needed this to prove even to ourselves that it had really happened. For those who listened to my speech, the adoption papers are still being processed (for Pelé to adopt me), but for now I am still a happy Brazilian orphan!

Posted by Kenny Cordero Rubinos at 10:54 AM 1 comments

The Office of Off-Campus Living & Commuting Student Services hosted the Cooking with Commuters event, co-sponsored by Lackmann Culinary Services on Tuesday, April 22nd in the Commuter Lounge in room 221 of the Mack Student Center. Commuting students learned about the benefits of a commuting student dining plan and how to make a delicious and nutritious on-the-go snack. 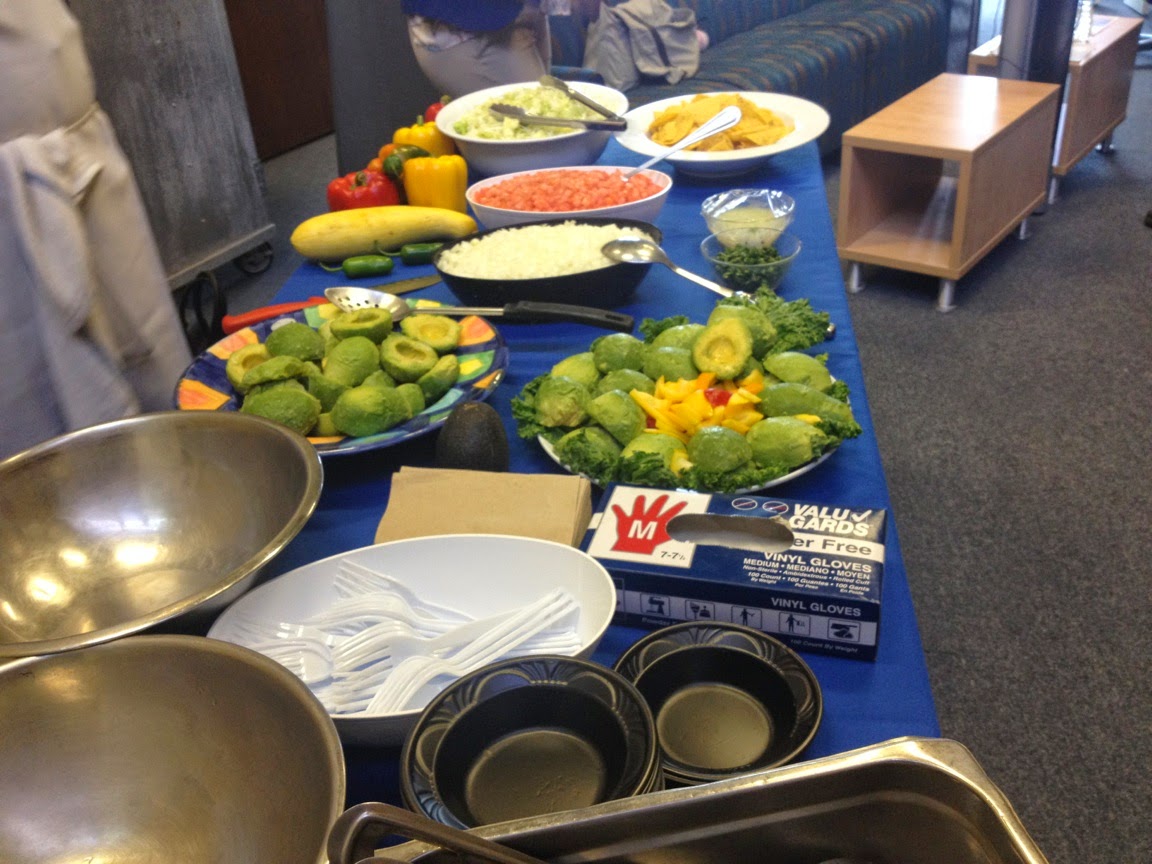 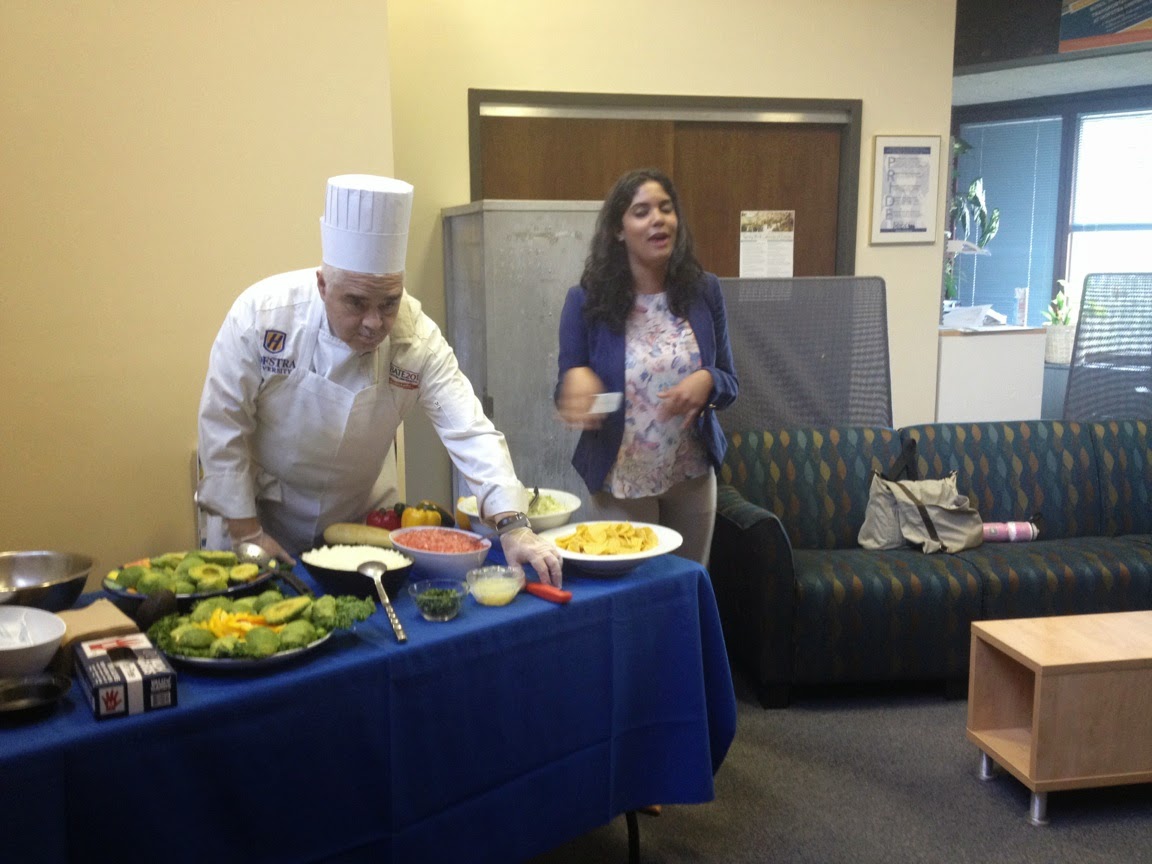 As the students squished avocado and cilantro together, they learned about saving money by getting a commuting student meal plan, and about all of the different eateries around campus. 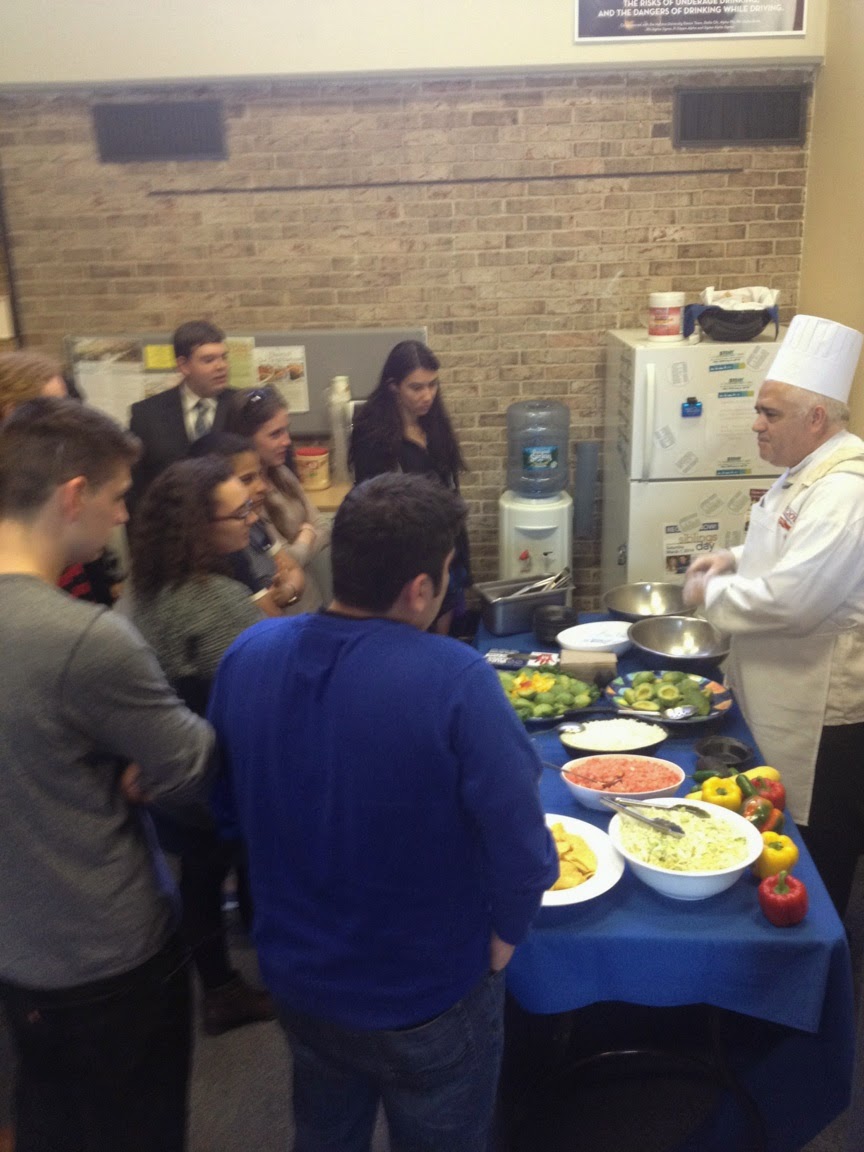 The Commuting Students enjoyed their mid-afternoon snack and the information that Lackmann Culinary Services provided them!

Bench Press Competition.  Students will begin to arrive at 5:30pm for the weigh-in process, and will have the opportunity to warm up before the competition officially begins at 7:30pm. 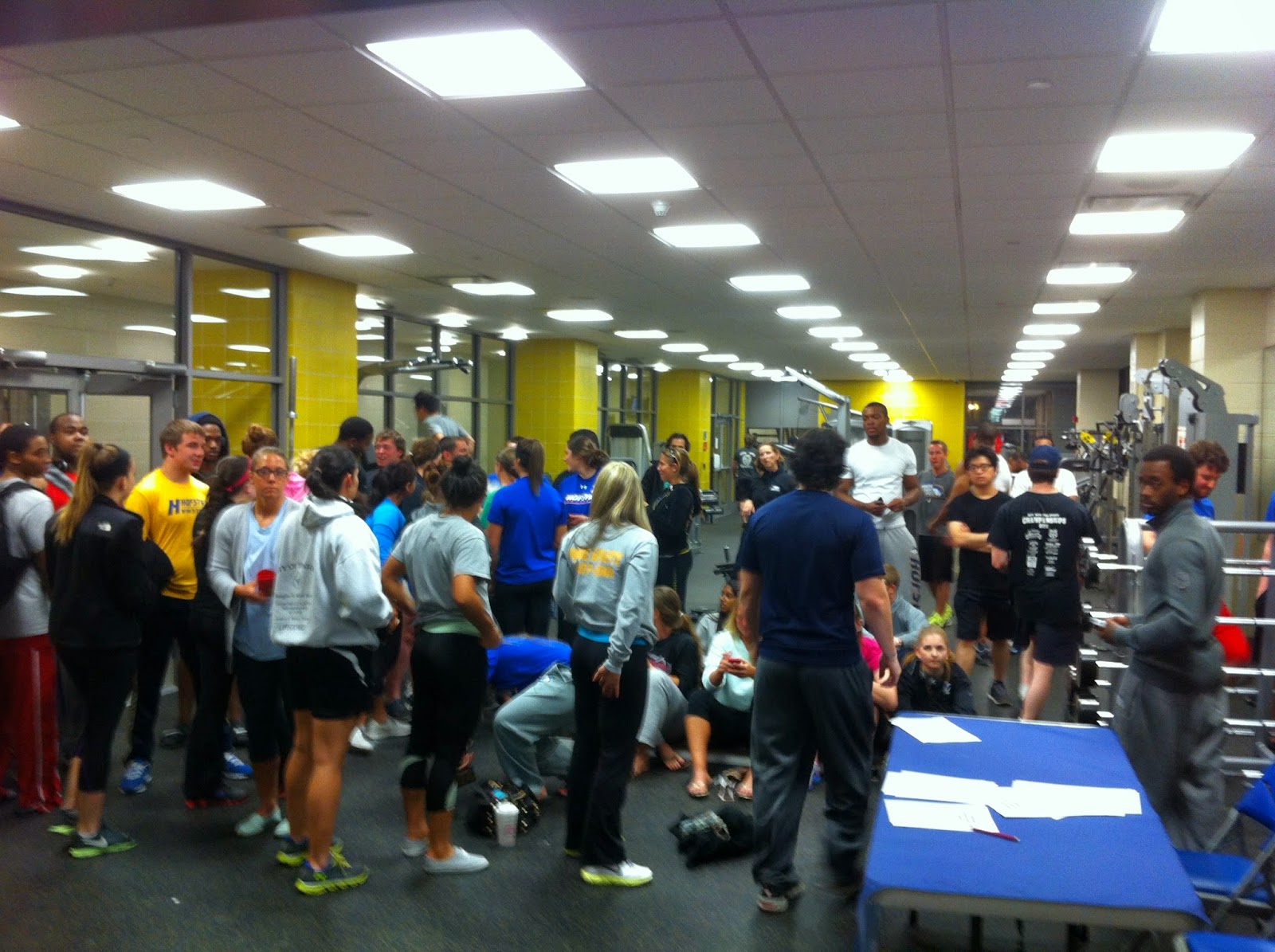 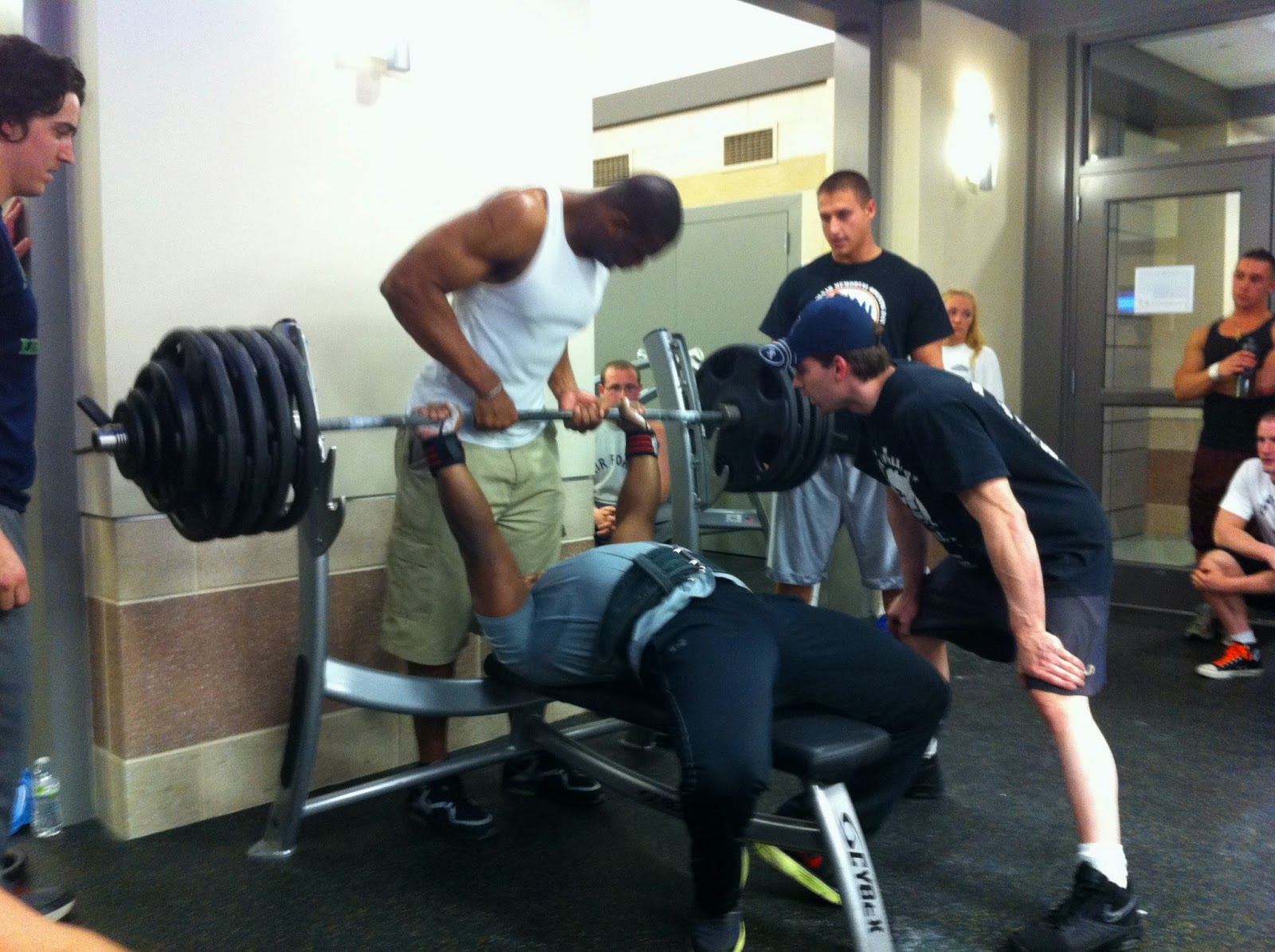 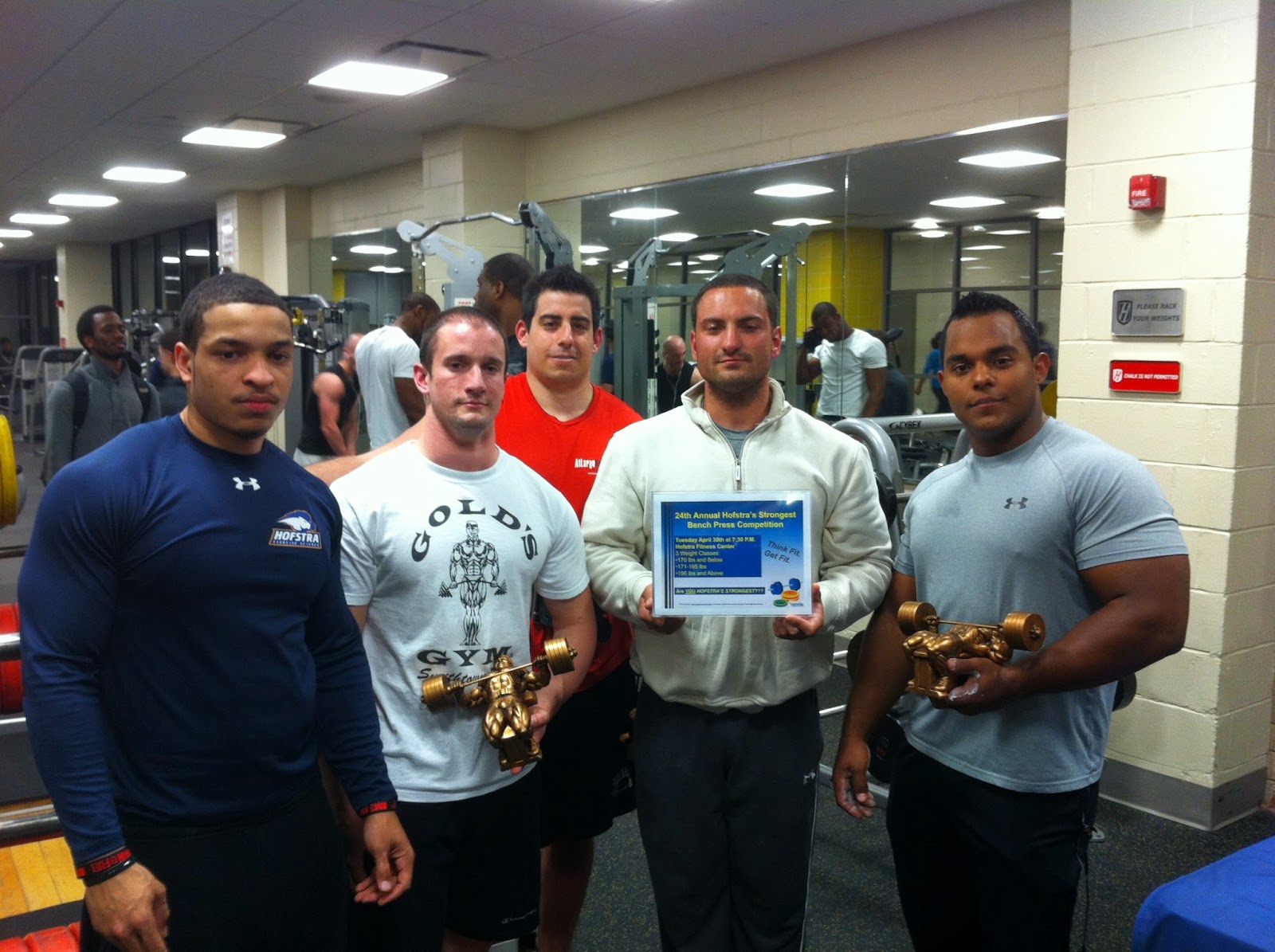 Who will be this year's winners?  Come down to the Fitness Center on Tuesday, April 29 to find out! 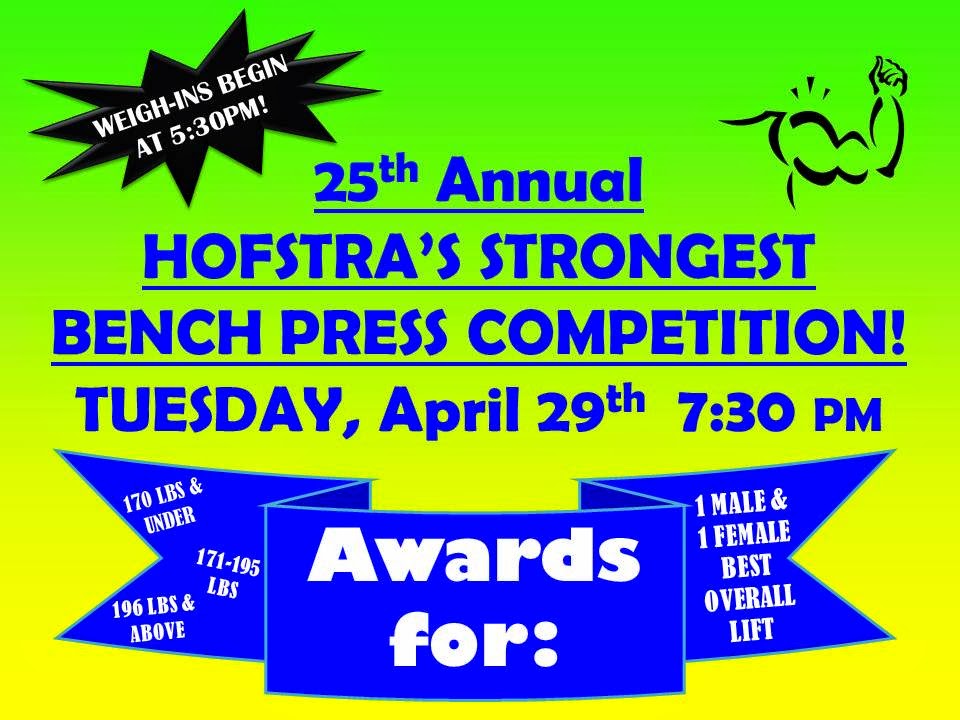 In the workshop, Dr. Qiu Ying talked about Chinese culture which has the large influence to the East Asian culture.  There are some main points about the Chinese culture.

1. Hard work as a symbol of achievement.

2. Collectivism (集体主义, jítǐ zhǔyì) - The Chinese are a collective society with a need for group affiliation, whether to their family, school, work group, or country.


3. Guanxi (关系, guānxì) – Guanxi describes the basic dynamic in personalized networks of influence, and is a central idea in Chinese society (Wikipedia).


4. Face (面子, miànzi) – It is hard to find a word in English to explain this.  There are several definitions in Wikipedia.  It shows a person’s social status.  It is something that is emotionally invested, and that can be lost, maintained, or enhanced.


6. Thriftiness (节俭, jiéjiǎn)–in average East Asian people, especially those in older generations, save around 30% - 40% of their salaries per month.


7. Education as a tool of social promotion.

In East Asia culture, the family comes first, then the individual.  It emphasizes the parents’ power.  You may hear people from East Asia talk a lot of their families’ concern or follow whatever their parents’ suggestions.  These interactions do not mean they are undeveloped.  The power distance is much higher in East Asia culture than Western culture.  This sometimes makes it hard for East Asian people to make decisions on their own, because they are taught to follow authority and respect their parents’ input.

The workshop was very successful.  Hopefully you also will learn more about East Asia Culture. If you are interested, try to make friends with our international students, take a class or join MISPO programs.