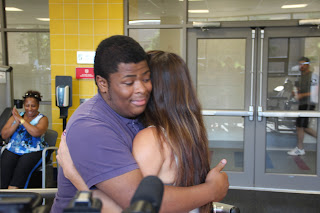 On Monday, July 2, 2012, Hofstra Young Alumna of the Year (Class of 2004) and trainer on NBC's Biggest Loser, Cara Castronuova, returned to the Hofstra University Fitness Center to give Hempstead high school student, Anthony Rogers, the opportunity to pursue a healthier lifestyle. By receiving the final available grant for Camp Shane, a six-week summer fitness camp located in Croton on Hudson, NY, Anthony will be able to start losing weight and arrive on the path to accomplishing his fitness goals.

"I was really impressed by (Anthony's) essay and his desire to lose weight," says Castronuova. "He's seen some tough times and I wanted to help him reach his goals." Yet, despite the excitement of the news and fanfare provided by the presence of Hofstra reps and local media, Anthony kept a reserved demeanor throughout the announcement, which Castronuova planned as a surprise. 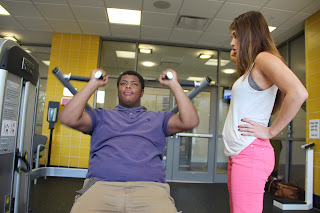 Though visibly grateful for the opportunity, Anthony did not respond to his acceptance as one might initially expect: when asked to comment on the daily struggles of being overweight, Anthony said, "I wouldn't call them daily struggles...I think about my body and look at who I am and that's me. I'm comfortable with myself, but I do want to get healthier;" and with the support of people like his family (his grandparents accompanied him to the Fitness Center) and Cara, he has all the tools to succeed even beyond his stay at Camp Shane.

Ms. Castronuova has been an active member in the Hofstra community for years, twice returning to campus prior to this week's appearance--once as a judge for Hofstra's annual student talent show and again to promote general health and fitness. She has also contributed to the surrounding community by volunteering her time to raise awareness for local wellness initiatives. 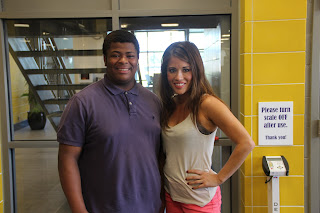 The Division of Student Affairs at Hofstra University wishes Anthony all the best as he strives to achieve better health this summer, and urges all those hoping to improve their fitness to join him in his effort to make the most of the coming months.
Posted by Nolan Meditz at 9:39 AM