This post is the fifth in a series profiling the Hofstra student organizations that were recognized for excellence at the 2013 Hofstra Student Leadership Awards.

Makin’ Treble is Hofstra’s all-female acapella group. Throughout the past year, Makin’ Treble has worked very hard to be a presence on campus for students to look up to. Our year began with an exciting invitation to perform on Anderson Cooper’s daytime TV show in honor of the movie Pitch Perfect. We got to be a part of a live studio audience, and learn about different aspects of performance, both on stage and for television. Treated like professionals, we got to see what it would be like to be a professional group in the world of entertainment. This was an incredibly educational experience for most of the group members, especially those pursuing a career in performance. 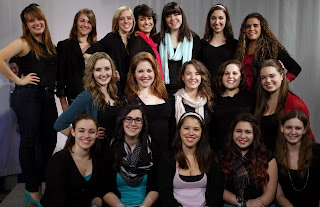 Throughout the year Makin’ Treble also performs in and around campus, at various academic open houses and for outside groups performing on campus. Some highlights include performing at the Drag Show every year and She’s the First Dance-A-Thon. We get to meet some wonderful people doing what they love, just as we are. One other event that Makin’ Treble participates in every year is Relay For Life. It’s a great opportunity for our group to really get to know each other, while fighting a cause that affects so many people every year.
The highlight of the year however, was Makin’ Trebles Spring Concert. The group decided to dedicate the concert to the many seniors leaving our group. Each senior had the opportunity to do whatever they wanted in regards to performance, and share the rest of their talent with the audience. Complete with a video of group members leaving a final sendoff, it was an incredible end to an inspiring year.
Winning “Performance Club of the Year” two years in a row truly inspires us to be the best we can be. Every girl in this group has something to offer the Hofstra community. The ladies of Makin’ Treble are heavily involved on campus, so you won’t ever just find them in one group alone, and it is strongly encouraged to get involved in other activities. The ladies of Makin’ Treble hope to continue to inspire others in and around campus for the upcoming years.