Hofstra Men’s Club Lacrosse drew the tough task of facing off against defending national champion Navy in the first round of the NCLL playoffs. The Pride traveled to Rip Miller Field in Annapolis, Maryland for the matchup on Saturday, April 30th, and following a strong start, they entered the half still within striking distance, only trailing 10-7. Navy showed their prowess as the second half moved along, and despite two-goal performances from Hofstra sophomores Mike Benvenuti and Tyler O’Brien, Navy secured a 16-8 win and advancement to the Elite 8. The loss ended a memorable and successful season for the Pride. 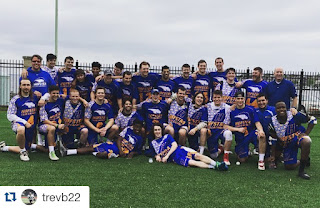 Hofstra Club Baseball took on NYU on Sunday, April 24th. Starting pitcher Justin Cusano went two innings, allowing zero runs before handing over the game to the relief pitchers. Brian Quadrino had a grand slam and two doubles to back the explosive offense of the Pride. Ben Lawlor was a home run short of the cycle, hitting two doubles, a triple, and a single. The offense carried the day for the Pride, with every starter recording a hit in a 20- 4 victory.

The Pride followed up that victory by splitting a doubleheader with Sacred Heart on Saturday, April 30th. In Hofstra's 8-0 win, P.J. Potter went 7 innings and allowed no earned runs. Ben Lawlor, Brian Quadrino, John Bopp and Steve Locorriere all recorded extra base hits.


Hofstra’s 28 Club Sports are always looking for new members and welcome all experience levels.  If you would like to find out more information about joining one of our clubs, please visit hofstra.edu/recreation and click on the ‘Club Sports’ tab, or feel free to visit us at the Hofstra Fitness Center with any questions you may have!
Ruby Staplehurst, Guest Blogger
Graduate Assistant, Recreation and Intramural Sports
Posted by Shaun Fean, Associate Director of Campus Recreation at 4:09 PM