Hofstra Men’s Club Lacrosse hosted UMass on Sunday, April 30th in the first round of the NCLL playoffs. This was Hofstra’s first home playoff game since 2014. In a close, hard fought game, the Pride prevailed by a score of 10-8. The team advanced to the Elite Eight of NCLL National Tournament at Navy, where they lost to eventual NCLL National Champion Towson, 10-7.


Hofstra Club Rowing traveled to New Rochelle, NY on Saturday, April 29th to compete in the Spring Metropolitan Championships. The team raced in a 2K semifinal race and came in third, which qualified the team to move onto finals. The boat line was as follows: Wendy Markert as stroke lead, Laura Wood as three seat, Lauren McCarthy as two seat, Olivia Marine as bow seat, and Steven Hartman as coxswain. In the finals, the team came home with a 6th place finish.


Hofstra Club Volleyball entered two teams to compete at Nassau Community College on Saturday, April 29th in the Volleyball Long Island (VBLI) tournament. The men’s team placed 5th in their pool, which included a wide variety of athletes of various skill levels. The men’s player of the day was Godwin Satome, who lead the team in kills. The women’s team placed 4th in their division. They competed in pool play with previous Division I athletes, as well as women of varying skill levels. The player of the day for the women was Ally Cowie, a graduating senior. Ally has served as captain and member of the executive board during her time as a member of the club and lead the team in blocks.


Hofstra Men’s Club Soccer traveled to Princeton University in New Jersey on Sunday, April 30th to take on Drexel and Princeton; the Pride would lose both of their games by scores of 4-3 and 3-1, respectively. Goals were scored by Cassio Fernandes, Zaid Al Zayer, and TJ Behari.


Hofstra Men’s Club Rugby traveled to Montclair, New Jersey on Sunday, April 30th to participate in a 7’s tournament with Montclair State and The College of New Jersey. The Pride went 2-2 on the day, with both a win and loss against Montclair and TCNJ. The team was led in scoring by Josh Beck, Dom Pizzuco, Andrew Gertz, and Matt Mitlitsky, who scored the game winning try against TCNJ.  Kyle Novak and Tayab Kirmani also chipped in with tries for the Pride.


Hofstra Club Baseball hosted the University of Delaware on Saturday, April 29th and Sunday, April 30th at University Field on Hofstra’s Campus. The Pride were swept in the three games series by scores of 20-1, 12-1, and 9-2. However, the team enjoyed the beautiful weather and honored their seniors who have meant so much to the program.


Ally led the team to a 4th place finish in their tournament at Nassau Community College, while leading the team in blocks. Congratulations to Ally! 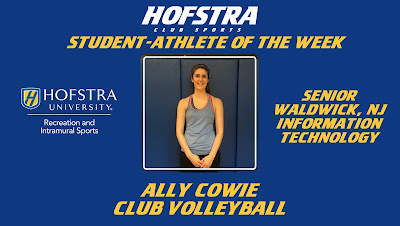 
Zachary Englis, Graduate Assistant for Club Sports, contributed to this blog.
Posted by Shaun Fean, Associate Director of Campus Recreation at 6:53 AM