Welcome back to the Hofstra Club Sports Roundup, where we highlight all of the latest news and scores from the world of Hofstra Club Sports. It has been a busy start to the Fall semester for many of our teams, so let’s get into it…

Women’s Club Rugby traveled to Thomas Felton Memorial Park in Modena, NY on Sunday, September 10th to take on SUNY New Paltz in their first game of the semester. The Pride competed hard and their new players stepped up, but it wasn’t enough to bring home the victory. Hofstra fell to SUNY New Paltz by a score of 57-5, with the lone try scored by newcomer Taryn LaSmith.


The team then hosted their home opener on Sunday, September 17th on the Hofstra Intramural Rugby Fields. The Pride had a rough day and fell to the Great Danes of the University of Albany by a score of 95-0. It was a tough learning experience for the team, but one that they hope will help the team grow as the season moves along.

Men’s Club Soccer traveled to Pace University on Saturday, September 9th to take on the Setters in the opening game of the NIRSA New York Metro Division. The Pride fell by a score of 2-1, with Hofstra’s lone goal coming from graduate student Captain Dan Edon.


The team next faced off against local rival Adelphi University on Tuesday, September 19th at Motamed Field in Garden City, NY. The Pride beat the Panthers by a score of 4-0, with Kartikeya Swarup, Ziad Al-Zayer, Daniel Edon and Cassio Daros all scoring a goal.

Club Ice Hockey opened up their preseason at IceWorks in Aston, PA for the ACHA D2 & D3 Showcase from Friday, September 15th to Sunday, September 17th. In their opener on Friday evening, the Pride took on their MCHC rivals from Suffolk County Community College. In a back and forth game, Hofstra fell 4-3 on a late power play goal. Captain Austin Natale found the back of the net twice, and Joe Grice added a goal in the loss.

In their second game on Saturday, September 16th, Hofstra shutout the LaSalle University Explorers, 9-0. Andrew Gagnon and Joe Grice each recorded a hat trick and Liam Hartenstein posted a shutout in goal for the first Hofstra victory of the season. Zack Lamberti and Collin Ewald each notched their first goals as members of the Pride Hockey Club. Alternate Captain Brandon Fauci also added a goal.

In the final game on Sunday, September 17th, the Pride came back from a 3-1 deficit against the Salisbury University Gulls to win their third straight game, 7-4. There were seven different goal scorers for Hofstra: Joe Grice, Zack Lamberti, Nick Lewis, Austin Natale, Collin Ewald, Lou Seda and John Voiklis. After a shaky start in the first period, Liam Hartenstein responded only allowing one goal the rest of the way.


The next Club Ice Hockey game will be the home opener on Friday, September 29th at 9:45pm against the Stevens Institute of Technology Ducks at the Northwell Health Ice Center in Eisenhower Park, East Meadow, NY.

The Rock Climbing Club traveled to The Cliffs in Long Island City, NY on Saturday, September 16th for their first climb of the semester. With nearly half new members, everyone was eager to learn and try out climbing. As a part of the climb, the club was able to raise $187 for victims of Hurricane Harvey, and after the E-Board decided to match the donation from the club’s income, the club was able to donate a total of $374 to hurricane relief efforts.

Club Baseball opened their 2017-2018 season by hosting a non-conference double header against UConn at nearby Wantagh Park. After losing many players to graduation after last season, the team has experienced a quick turnover adding 8 new players to the mix. While the team dropped both games by scores of 14-2 and 7-4, the pitching performances of Steve Locorriere and Nick Buscemi provided reason for optimism. At the dish, Junior Anthony Speelman excelled, going 2 for 3 and reaching base in 6 of his 7 plate appearances. The team is back on the field against Fordham on Saturday, September 23rd at 10am at Wantagh Park.


Ryan, who is the President of the Running Club, completed in a two-day, 203 mile Ragnar Relay across New Hampshire called Reach the Beach. He ran a combined 19.4 miles over 3 legs at a 6:32 pace and personally raised over $1,000 for Camp Calumet Lutheran. The event has helped raise over $90,000. Congratulations to Ryan! 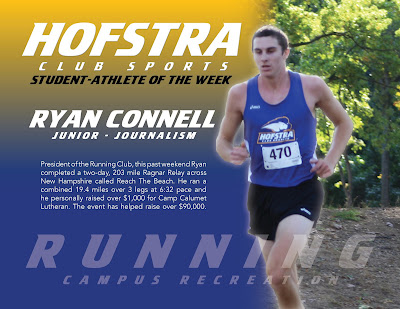 Hofstra’s 28 Club Sports are always looking for new members and welcome all experience levels.  If you would like to find out more information about joining one of our clubs, please visit hofstra.edu/recreation and click on the ‘Club Sports’ tab, or feel free to visit us at the Hofstra Fitness Center with any questions you may have!
Posted by Shaun Fean, Associate Director of Campus Recreation at 3:04 PM