Club Men's Lacrosse hosted Monmouth University on Sunday, February 25th at Shuart Stadium and came away with an 11-7 victory. Ryan Cook led the way with three goals and two assists. Martin Beer and Ryan Garry each chipped in two goals and an assist and Keith Marlor, Michael Benvenuti, and Evan Vecchia each contributed a goal and an assist.

Club Women's Ultimate Frisbee traveled to Yardley, Pennsylvania on Saturday, February 24th to participate in a tournament. Despite heavy rains, the team played very hard during their three games. Hofstra beat The College of New Jersey 13-11, but fell to Temple 13-2 and Ithaca 13-3.

Club Quidditch hosted a Big Apple Quidditch Conference Tournament on Saturday, February 24th. Stony Brook University Quidditch, New York University Quidditch, New York University Pigeons, Macaulay Quidditch, Atlantic Dragons and Bosnyan Bearsharks all traveled to Hofstra to take part in the tournament. Hofstra won all three of their games on the day. The Pride started off the day beating Stony Brook 160-40, followed by defeating the Atlantic Dragons 110-50, and finally the NYU Pigeons 160-40.  Robbie Levinson caught the snitch in each of the three games to give Hofstra their victories.

Club Billiards won their weekly match at Baldwin Billiards by a score of 8-4. Steve Jacobovitz, Victoria Wetmore, and Kevin Gomes all won their matches to help the Pride continue climbing up the rankings as they approach mid-season.

In their second game against Sacred Heart, the Pride fell to the Pioneers 9-3. Goals were scored by Linnea Barbour, Sabrina Duncan and Jessie Allendorf.
Club Running had a solid opening first meet of the season on the Gordon Indoor Track at Harvard University in Cambridge, Massachusetts on Saturday, February 24th.  Sean Masterson had the best overall finish placing 8th in the long jump. Ryan Connell had the best running performance running a 2:06 800m and placing 9th overall. Courtney Gallagher posted a 6:36 in the women's mile.

Club Men's and Women’s Rugby were honored with 2 players from each team being named to the Tri-State Rugby All-Conference Teams. Liliana Hinojos Madrid and Leah Bodh were named to the women’s team, while Tayab Kirmani and Josh Beck received the honor on the men’s side. Congratulations to Liliana, Leah, Tayab, and Josh! 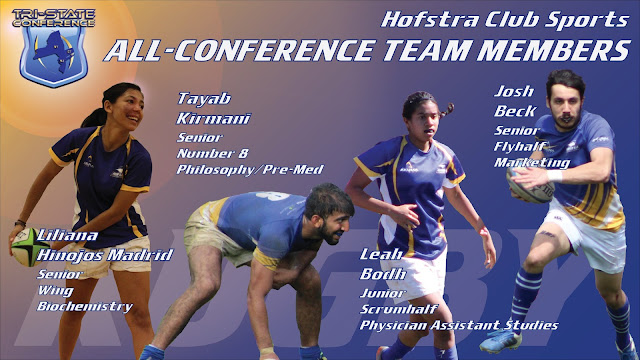 A member of Club Lacrosse since freshman year, Beer has helped shape the Club Lacrosse program into a yearly NCLL contender. In their first game of the spring semester, by tallying two goals and an assist, Beer helped lead the Pride to an 11-7 victory over Monmouth University. 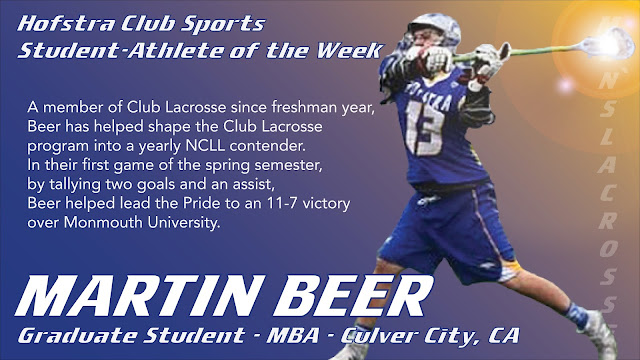 Posted by Shaun Fean, Associate Director of Campus Recreation at 7:29 AM