In their second game, Hofstra took on Long Island Rival Stony Brook University. Seven was the lucky number again for the Pride, as they posted a 7-3 victory behind two goals apiece from David Frattaroli and Zack Lamberti, as well as goals from Andrew Gagnon, Austin Natale, and Daniel Harchut. Harchut’s goal was the first of his Hofstra career.

In their third game, Hofstra faced off against Fordham University, the team who eliminated them from the MCHC playoffs last spring. The game was much closer than last season’s 3-0 playoff ouster, as the Pride battled the Rams to a 2-2 tie. Daniel Harchut and Vinny Cacciatore were the goal scorers for Hofstra.

The last game of the tournament squared Hofstra off against the Stevens Institute of Technology. Despite falling into an early 5-0 hole, the Pride showed fight as they rallied to cut the lead to 5-3 behind goals from Austin Natale, Vinny Cacciatore and David Frattoroli. However, time would run out on Hofstra as the Ducks would add a late goal to take home a 6-3 victory. Overall, Hofstra finished 2-1-1 in the tournament, which was a successful building block for the rest of the season.

Club Baseball opened the season with a doubleheader against Adelphi University. After dropping game one 11-1, the Pride were able to manage a split in the doubleheader, as Stephen Locorriere pitched 4 shutout innings and reliever Brandon Santos finished the job from there as the Pride defeated Adelphi 7-2. Hofstra will next take on Stony Brook University in a doubleheader at Wantagh Park on Saturday, September 22nd.

Club Men’s Rugby took on Montclair State University at home on Sunday, September 16th. The Pride came out fast and furious, as they dominated the Red Hawks from start to finish in posting an 86-0 victory. Hofstra received contributions from up and down the line up as Aidan Woods (3), Raymond Brown (2), Javon Hanson (2), Devon Blair (2), Sal Amico (1), Lamar Duff (1), Jeremey Tabansi (1), Ian Budding (1) and Jamel Hughes (1) all recorded tries. Hofstra’s next game is at home on Sunday, September 23rd against TCNJ.

Club Women’s Rugby also took the pitch on Sunday, September 16th to take on Stony Brook University. While the Pride played with great spirit, they were overmatched on this day as they fell to the Seawolves 102-0. The women get another chance at improvement this Sunday, September 23rd against the University of New Haven.

Club Rock Climbing had their first climb of the year at The Cliffs in Long Island City on Saturday, September 15th. There were 40 club members in attendance and the club’s newest members were given an introductory course. The next climb is at Brooklyn Boulders on September 22nd.

CLUB SPORTS STUDENT-ATHLETE OF THE WEEK
Austin Natale-Club Ice Hockey-Senior-Accounting-Danbury, CT
Natale posted 3 goals and stout defense while helping lead the Pride to a 2-1-1 record at the IceWorks Preseason Showcase in Aston, Pennsylvania. 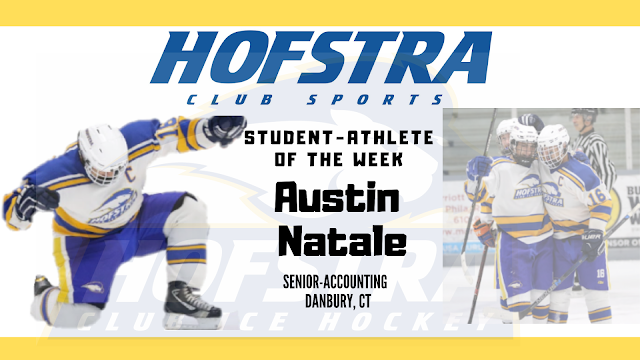 Hofstra’s 25 Club Sports are always looking for new members and welcome all experience levels.  If you would like to find out more information about joining one of our clubs, please visit hofstra.edu/recreation and click on the ‘Club Sports’ tab, or feel free to visit us at the Hofstra Fitness Center with any questions you may have!

Posted by Shaun Fean, Associate Director of Campus Recreation at 10:46 AM