The Hofstra softball team watched batting practice from the field and were honored by the Mets in a pregame ceremony at Citi Field last night.

Most of the players and the entire coaching staff from Hofstra were recognized before the Mets-Orioles game. The Pride won the Colonial Athletic Association championship and the Los Angeles Regional en route to its first-ever appearance in the Super Regional. Hofstra finished the season ranked 16th in the final NFCA poll, the highest season-ending finish in school history. 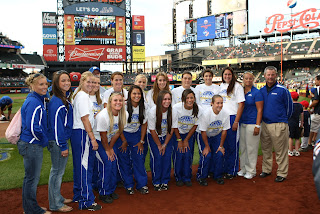 Before the ceremonial first pitch, Hofstra posed for a group photo on the field and had the accomplishments from their 42-15 season read over the public address system. Junior Olivia Galati’s season was also highlighted to the crowd. Galati is the only first-team All-America in program history and set a school record with a 34-7 record and led all Division I pitchers with 17 shutouts and a 0.95 ERA.

“It’s so exciting to be with my teammates and I’m a huge David Wright fan, so it’s an experience I’ll never forget,” junior outfielder Tessa Ziemba said. “It’s so special because you don’t get to do something like this often, and getting to see the seniors and have everyone together  again is so special.”

“There’s no other experience like this to be on a professional field like this,” senior third baseman Krista Thorn said. “It’s  been an amazing four years and I’m glad to spend some more time with my fellow seniors.”

For more on Hofstra Athletics, make sure to check out the new www.GoHofstra.com site that launched today.