The Purpose of Intervarsity Christian Fellowship is to establish and advance at colleges and universities witnessing communities of students and faculty; all in response to God’s love, truth, and grace. Our vision is to see students and faculty transformed, campuses renewed, and world changers developed. In order to improve the current reality of our campus, we must work in simple steps to achieve our future reality. A few ways Intervarsity has taken that next simple step is through our campus events. For example, the fellowship hosted an event called, “Mythbusters: The Truth About Sexual Assault.” This event allowed for students to express their emotions towards sexual assault in song, spoken word, poetry, and dance while informing their peers of the shocking statistics. Intervarsity cares for its community on and off campus; so when Hurricane Sandy hit, Intervarsity was ready to lend a helping hand. We held an event titled, “Hope for Sandy” which included a concert to raise funds that would aid the victims of Sandy to reconstruct their homes, and reestablish hope in their hearts. 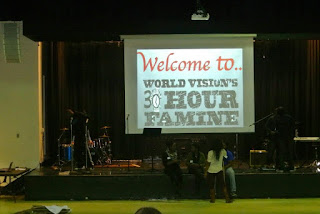 The fellowship strives to fight against injustice. As one of our core values defines, we pursue ethnic reconciliation by practicing mutual empowerment, grace, and truth, by promoting personal and systemic justice. This past year our hearts were placed on fighting against world hunger. In our event, “30 Hour Famine,” participants fasted for 30 hours; representing the average time between meals for a child living in a third world.  All the fundraising money went to an organization called World Vision. Additionally, participants went out on service projects including, making and handing out care packages to children at local hospitals, feeding the homeless, visiting nursing homes, and cleaning local parks. There were also games and a concert which featured, Christian rapper, Andy Mineo.  Through the Famine, individuals made a personal choice to take a stand; they experienced hunger firsthand and went without food so others don’t have to. The fellowship also created the “Hofstra Freedom Movement” which raised awareness of slavery and human trafficking. Intervarsity held a free screening of "Nefarious: Merchant of Souls" and a  Q&A panel with NYS Judge, Pretrial Service Officer, Non-profit org, and missionary. We also encouraged students to join us in standing for freedom.  We stood for 27 hours for the 27 million in slavery today. The goal was to spread the word that slavery is real, but that together we can end it.

Hofstra Intervarsity was also the proud winner of the 2013 Religious Club of The year Award and we hope to continue the great work in the upcoming year.