Hofstra Club Softball traveled to Morris Park, New Jersey to take on Montclair State University on Sunday, October 30th. In the first game of the tripleheader, the Pride won by a score of 10-4. Montclair would even the set at a win apiece beating the Pride 4-3 in game two. The Pride would win the deciding game by a score of 6-2 after the game was called in the 6th inning due to rain.

On Sunday, November 6th, Club Softball traveled to Piscataway, New Jersey to take on Rutgers University in a tripleheader. Rutgers stands atop the conference with a record of 5-1. The Pride went 1-2 against Rutgers, managing to salvage the third game of the day to beat Rutgers in a thriller, 14-13.


Hofstra Club Ice Hockey traveled to Monsey, New York to take on the undefeated Ramapo Roadrunners on Friday, November 4th. The Pride went into the second period tied with the Roadrunners at zero before defenseman Joe Grice scored a shorthanded goal to give the Pride a 1-0 lead. However, Ramapo would quickly answer to even the score at one going into the third. Ramapo would score three unanswered goals to beat Hofstra by a final score of 4-1.

On Saturday, November 5th, the Pride hosted the Suffolk Community College Sharks at Northwell Health Ice Center at Eisenhower Park in Westbury, New York. The first period was played evenly, and Nick Lewis struck first for the Pride to give Hofstra the lead, 1-0. Before the end of the first, the Sharks would tie the score at one. Unfortunately for the Pride, the Sharks came out flying and pounded the Pride by scoring seven unanswered goals to finish the second ahead 8-1. Ultimately, the Pride would fall to the Sharks by a score of 12-1.


Hofstra Club Roller Hockey played their home weekend at Skate Safe America in Old Bethpage, New York on Saturday, November 5th and Sunday, November 6th. The Division 1 team went 1-3, winning their game against SUNY Cortland by a score of 6-4. Goals for the Pride were scored by Andrew Gagnon, Billy Summa, Nick Lewis, Dan Schaefer, and Nigel Grove. Goalie Ryan Smith was named the 1st star of the game with 30 saves. The Division 3 team also went 1-3 over the weekend. The squad won their game against Northeastern University by a score of 5-3. Anthony Accardi was the 1st star of the game garnering two goals for the Pride. Nick Lewis followed up the scoring with two goals of his own and was named the 2nd star of the game. Elijah Vaillancourt was named 3rd star of the game with two assists.


Club Sport Student-Athlete of the Week

Nick Lewis had a busy weekend starring for both Hofstra Club Ice Hockey and Hofstra Club Roller Hockey. In the ice hockey club’s game against Ramapo, Lewis created many scoring opportunities for the Pride, as well as prevented odd-man rushes from happening by taking the puck away and back-checking. The following night against Suffolk, he opened the scoring with a breakaway goal. On the roller hockey side, Nick was also outstanding, scoring a goal in the Division 1’s teams win over SUNY Cortland, and being named the 2nd star of the game in the Division 3’s win over Northeastern. 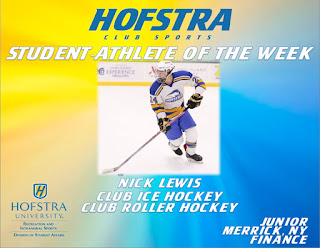