Hofstra Club Ice Hockey traveled to Parkwood, New York, on Saturday, November 11th to take on the U.S. Merchant Marine Academy. Despite a goal from Brandon Fauci, the Pride fell to Kings Point by a score of 4-1.


On Sunday, November 20th, Hofstra hosted Columbia University at the Northwell Health Ice Center at Eisenhower Park for Senior Night. The Pride honored seniors Giuseppe Chiaraville and David Craig for their hard work and dedication that they put towards the team over their four years with the Pride. The team also commemorated Joey Comunale, an alumni player who was killed on Saturday, November 12th. Columbia would score first but Hofstra answered quickly with a goal from Giuseppe Chiaraville to take the game into the second tied at one. Once again, in the second period, Columbia would score to take the lead, followed by a score from Hofstra’s Eli Vaillancourt, to even it at two heading into the third period. To start the third period, Nick Lewis would score on the power play for the Pride to take a 3-2 lead. Vincent Luna and Eli Vaillancourt would add two more goals for Hofstra to put Columbia away by a score of 5-2. The Pride improved their record to 3-7-1 on the season.

Hofstra Men’s Club Lacrosse traveled to Fairfield, Connecticut to take on the Stags of Fairfield University, on Saturday, November 19th. The Pride came out flat to start the game but rallied n the second half behind attackmen Martin Beer and midfielder Mike Benvenuti, who each tallied two goals. Goalie Hunter Reynolds helped keep the score from getting out of hand with a series of remarkable saves. Unfortunately, the Pride could not keep up with the Stags and fell to Fairfield by a score of 11-6.


On Saturday, November 26th, the team headed to Randall’s Island for the New York Seven’s Tournament. The team earned a strong 4th place finish, highlighted by an excited 19-15 victory over Ithaca College.


Hofstra Men's Club Ultimate hosted their home tournament weekend, on Saturday, November 19th and Sunday, November 20th. Captain Brian Kelly led the team through both days. In pool play, the team went 2-4. Ian Weimer had the highlight of the weekend with a rare Callahan, which is an interception in the end zone for an immediate score. In some very spirited games against our own alumni team, the Flying Dutchmen put up respectable performances full of great plays and solid teamwork.


Hofstra Club Baseball traveled to Boston, Massachusetts for a two game series against the Huskies of Northeastern University on Saturday, November 13th. In the first game, the Pride held a 4-3 lead until the 4th inning where Northeastern batted around and took a 10-4 lead that they would hold for the rest of the game. In game two, it was much of the same. The game was close to start, but the Huskies proved to be too much for the Pride. Hofstra fell to Northeastern by a score of 11-4. 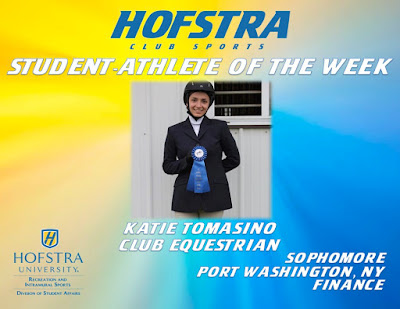