Hofstra Men’s Club Lacrosse traveled upstate to Albany, New York to take on the Great Danes of Albany on Sunday, April 9th. The Pride put the pressure on to start the game and wouldn’t slow down as they held on for a 10-7 win. The team was led by Ryan Garry, Keith Marlor, Mike Fitzpatrick, and Mike Benvenuti who each had two goals.

On Friday, April 14th, the Men's Club Lacrosse team traveled out east to Stony Brook, New York to take on the Seawolves of Stony Brook University in the Battle of Long Island.  The game was completely dominated by the Pride as they were firing on all cylinders on both offense and defense.  After taking an early lead, the Pride would end up winning 14-4.

On Monday, April 17th, the Pride hosted Suffolk Community College.  Mike Benvenuti led the Pride with 6 goals as the Pride would go on to beat Suffolk by a score of 12-4.
The Pride are ranked #9 by NCLL as they approach the end of their regular season.

Hofstra Women’s Club Lacrosse had their Senior Day on Sunday, April 9th at Shuart Stadium. The Pride hosted Quinnipiac University and Stony Brook University with a bid to Regionals on the line. In their first game against Quinnipiac, Jessie Allendorf led the Pride with three goals, as they would go on to beat the Bobcats, 9-6. In their second game against Stony Brook, the Pride would be led in scoring by Zoe Sczcotka and Jessie Allendorf, who both scored three goals in the game for the Pride. Hofstra would beat Stony Brook, 11-8. After a successful weekend, the Pride earned their bid to the New England Women's Lacrosse League (NEWLL) Regionals hosted at Providence College in Rhode Island.

On Saturday, April 15th the Pride traveled to Providence, Rhode Island and took on top seeded Vermont in the first round of the NEWLL Regional Tournament.  The Pride fought extremely hard and never gave up.  Despite their effort, Vermont outscored the Pride by a score of 21-5.  Even though the team came up short, the trip to playoffs was a great way for Hofstra to end their 2016-2017 season.

Hofstra Men's Club Rugby hosted the Long Island Cup on Saturday, April 15th.  In their first game, the Pride took on Stony Brook University. Josh Beck, Jeremy Tabansi, Kyle Novak, and Matt Mitlitsky all scored tries for the Pride.  Despite being the underdog, the Pride put up a fight and lost to the Seawolves, 36-22.  In the second game of the Long Island Cup, Molloy College took on Stony Brook and won 36-29.  In the final game of the day, the Pride took on the Lions from Molloy.  Molloy outplayed Hofstra and won 36-12.  With the win, Molloy claimed the Long Island Cup.  Scoring in the final game for the Pride were Jeremy Tabansi and Josh Beck.

Hofstra Club Baseball played Rutgers University in Eisenhower Park in East Meadow, New York on Saturday and Sunday, April 8th and 9th. On Saturday, the Pride played a doubleheader. Justin Cusano pitched the first game and Sean Cunningham started the second. Justin Cusano, Ryan Fissene, and Stephen Locorriere led the team in hits throughout both games. Despite a strong effort, the Pride would lose the first game, but behind strong pitching from Cunningham, the Pride would take the second game of the doubleheader. Cunningham allowed only one earned run and went on to secure the win for the Pride. Unfortunately, Rutgers forfeited the game on Sunday, so the Pride went 2-1 this weekend to keep their playoff hopes alive.

Hofstra Women’s Club Rugby hosted their alumni on Saturday, April 8th in a round robin tournament. It was a great opportunity for our current players to catch up and learn from former HUWRFC players.

The team then traveled to Stony Brook University in Stony Brook, New York to play in the Tri-State Championship Tournament on Sunday, April 9th. The Pride played Stony Brook, Vassar College, and Siena College. Unfortunately, the Pride would lose to all three teams. Gabriella Johns and Ashley Higby scored tries for the Pride.

Hofstra Club Roller Hockey flew to Fort Myers, Florida from Wednesday, April 5th to Saturday, April 8th to compete in the 2017 National Collegiate Roller Hockey Championships. Both the DI and DIII teams competed for the first time together at Nationals in the club’s 15-year history. The DI squad played hard, but went 0-5, losing to Missouri, Robert Morris, Western Michigan, and Eastern Michigan. Nick Lewis led the team in points, registering 8 points. Andrew Gagnon led the team in goals with 6. The DIII team fared better, finishing 2-2. The team beat Cortland and Florida Gulf Coast before losing to Cal State Fullerton and Neumann. Anthony Accardi and Matt Tavernite led the team in points for the tournament.

Hofstra Women’s Club Soccer traveled to Rider University in Lawrenceville, New Jersey to take on Rider University, The College of New Jersey, and Rutgers University on Saturday, April 8th. Despite not recording a win on the day, the team played solid defense led by captain Sarah Bouzaidi and Marisa Saia. Casey Taylor played well in net for the Pride.

Ben Lawlor-Club Baseball-Senior-Criminal Justice-York, ME
In his team’s 2 games against Rutgers, Lawlor smashed 6 hits in 8 at bats including a double, 4 RBI, 4 runs scored, and 2 stolen bases. Congratulations to Ben! 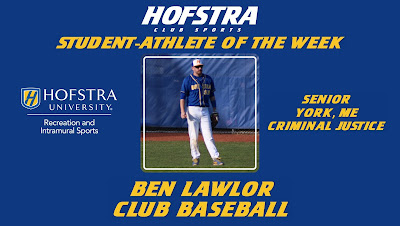 Hofstra’s 28 Club Sports are always looking for new members and welcome all experience levels.  If you would like to find out more information about joining one of our clubs, please visit hofstra.edu/recreation and click on the ‘Club Sports’ tab, or feel free to visit us at the Hofstra Fitness Center with any questions you may have!
Zachary Englis, Guest Blogger
Graduate Assistant, Recreation and Intramural Sports
Posted by Shaun Fean, Associate Director of Campus Recreation at 2:37 PM