Hofstra Men’s Club Lacrosse traveled to historic Franklin Field at the University of Pennsylvania in Philadelphia on Sunday, April 2nd. The Pride began the day by playing #3 ranked Penn. The Pride had the lead for most of the game thanks to the outstanding play of their defense and goalie, Brad Rowe. After a hard fought game, Hofstra won, 6-4. In their second game of the day, Hofstra took on #7 ranked West Chester. The game was extremely physical and hard fought by both teams. After several lead changes, and no shortage of effort, the Pride lost, 7-6.

On Wednesday, April 5th, the Pride hosted Fairfield under the lights at Shuart Stadium. The Pride came out of the gates hot and held the lead for the entire game. The team was lead by junior, Mike Benvenutti who turned in a hat trick. Ryan Garry also posted two goals of his own. Brad Rowe was solid in net with 15 saves. The 8-6 victory inches the Pride that much closer to securing a playoff spot.

Hofstra Club Baseball hosted Sacred Heart University for a doubleheader at University Field on Sunday, April 2nd. Justin Cusano and Ben Lawlor lead the team in hits throughout the two games. Despite the strong pitching performance of Cusano, the Pride would drop the first game, 3-1. They would fight back to win game two 6-2, behind a great outing from pitcher Sean Cunningham.

Hofstra Women’s Club Ultimate Frisbee traveled to the University of Delaware to compete in the Delaware Classic in Newark, Delaware on Saturday, April 1st and Sunday, April 2nd. The Pride had a rough weekend, winning only one of their seven contests.

Hofstra Men’s Club Ultimate Frisbee traveled to New Jersey on Saturday, April 1st and Sunday, April 2nd, to compete in the Garden State Invitational. The Flying Dutchmen turned in a solid weekend going 3-3 to finish their regular season with a record qualifying the team for post-season play.

Hofstra Women’s Club Lacrosse hosted Stony Brook and NYU at Shuart Stadium on Sunday, April 2nd. The Pride beat Stony Brook by a score of 11-2 and fell to NYU by a score of 9-6.
Hofstra Men’s Club Rugby traveled to Poughkeepsie, New York to take part in the Vassar Sevens Tournament on Sunday, April 2nd. The Pride went undefeated in pool play. Hofstra defeated Siena, 36-5, Vassar, 50-0, Drew, 34-10, and Montclair, 28-21. Throughout the day, Dylan Peterson had six tries, Josh Beck had 5 tries, Kyle Novak had 4 tries, and David Pedziwiatr had 4 tries. The Pride ended up losing to the defending champions, Marist, 32-12.

Brad Rowe-Men’s Club Lacrosse-Senior-Mechanical Engineering-Watertown, NY
Brad held number #3 ranked Penn to only 4 goals while having 10 saves in a big win for the Pride. On Wednesday night, he held long time rival, Fairfield, to 6 goals and posted 15 saves in the 8-6 victory. Congratulations to Brad! 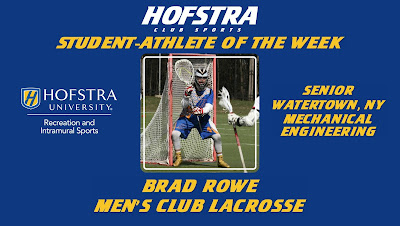 Wednesday, April 12th – St. Baldrick’s hosted by Hofstra Club Roller Hockey and Hofstra Recreation, Student Center, Hempstead, NY – 11:00am
Join us in conquering children’s cancer!
Feel free to become a member of our team and/or donate to a great cause: https://www.stbaldricks.org/teams/HofstraRecreation

Saturday, April 29th – Relay for Life, Intramural Fields, Hempstead, NY – 5:00pm
Join us in raising money for the American Cancer Society!
Club Sports is fundraising by selling t-shirts and sweatshirts with a portion of the proceeds going towards our Relay for Life team's goal of reaching $1,000.
You can purchase a t-shirt or sweatshirt here: https://www.booster.com/hofclubsports
You can also join our team or make a donation here: http://tinyurl.com/HofCSRelay

Hofstra’s 28 Club Sports are always looking for new members and welcome all experience levels.  If you would like to find out more information about joining one of our clubs, please visit hofstra.edu/recreation and click on the ‘Club Sports’ tab, or feel free to visit us at the Hofstra Fitness Center with any questions you may have!
Zachary Englis, Guest Blogger
Graduate Assistant, Recreation and Intramural Sports
Posted by Shaun Fean, Associate Director of Campus Recreation at 1:13 PM