Hofstra Club Quidditch flew down to San Marcos, Texas to compete in the Consolation Cup Tournament hosted by Texas State University Quidditch. The tournament featured a total of 22 teams competing on Saturday, March 25th and Sunday, March 26th. On the first day of the tournament Hofstra went 3-2. Robbie Levinson had two snitch catches on the day. Hofstra beat Northern Arizona University, 120*-60, LSU, 120*-20, and UMass Amherst, 140-60* and Hofstra fell to Stephen F. Austin University Lumberjacks, 120*-60, and Southern Illinois University, 110-140*. A successful first day placed Hofstra as the 9th seed in bracket play. Unfortunately, Hofstra would lose their first game on the second day to the University of Northern Colorado, 160*-90, knocking the Flying Dutchmen out of the tournament.

Hofstra Club Equestrian competed at Good Shepherd Farm in Yaphank, New York on Sunday, March 26th. Captain Kate Milford was the only rider that competed in the Regional Competition. She rode well on a difficult horse and placed 6th overall in the region for her Walk Trot Canter Class. The team placed 8th overall for the season.


In their game against Sacred Heart, Zoe Szczotka played a solid all around game. From taking faceoffs, to playing defense, Zoe culminated her awesome play by scoring a hat trick for the Women’s Club Lacrosse team! Congratulations to Zoe! 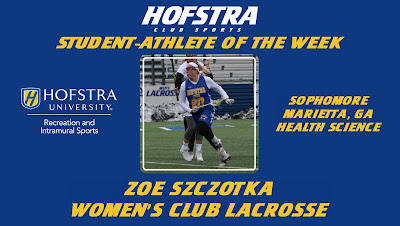 
Join us in conquering children’s cancer! Feel free to become a member of our team and/or donate to a great cause: https://www.stbaldricks.org/teams/HofstraRecreation


Join us in raising money for the American Cancer Society!


Hofstra Club Sports is fundraising by selling t-shirts and sweatshirts with a portion of the proceeds going towards our Relay for Life team's goal of reaching $1,000. You can purchase a t-shirt or sweatshirt here: 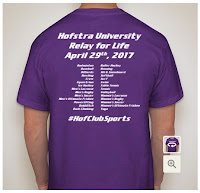 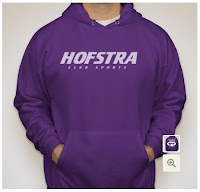 You can also join our team or make a donation here: