Hofstra Quidditch hosted a tournament on the Hofstra Intramural Fields on Saturday, March 4th. In their first game against Stony Brook, the Dutchmen would beat the Seawolves with a snitch grab by Jonathan Fidis, winning 70*-20.  In their second game, against the New York Pigeons, Hofstra would win by a score of 130*-70, with Kyle Bohringer securing the snitch pull for Hofstra.

Hofstra Women’s Club Rugby traveled to Fordham University in the Bronx to play both the Fordham Rams and the Manhattanville College Valiants on Sunday, March 5th. The Pride beat the Rams, 24-10, and beat the Valiants, 29–12. Tries were scored by Gabby Johns, Lili Hinojos-Madrid, Leah Bodh, and Natalie Davis.

Hofstra Club Roller Hockey’s DIII team went 1-2 in the ECRHA playoffs. The Pride beat Northeastern 8-4, and lost to Cortland 4-1 and Rowan 5-3.  Nicholas Powers led the team in scoring with 1 goal and 4 assists in the three games. The team finished in fourth place at regionals.

Hofstra Men’s Club Lacrosse traveled to Rutgers University in New Brunswick, New Jersey to take on both Rutgers and Towson. Against Rutgers, the Pride entered the fourth quarter down 5-2; with just two minutes left to play, the Pride were able to tie the game at 6, only to have Rutgers score the next goal to beat the Pride 7-6.  In the next game against the defending NCLL national champions from Towson University, the Pride would again fall behind early in the first half, but were able to tie the game at 5 in the fourth. Again, the Pride would let up a late goal to lose 6-5.

Learning from their fourth quarter mishaps, the Pride would take that lesson to their next game against Stevens Institute of Technology when they hosted the Ducks on Wednesday, March 8th at Shuart Stadium. In a back and forth game, the Pride were down a goal with under a minute left to play. Junior Ryan Cook was able to tie the game at 10, and junior Ryan Garry was able to net the game winning goal for the Pride to complete his hat trick and secure the 11-10 win for the Pride. Mike Benvenutti scored four goals in the game for the Pride.

Zach Armantrading-Club Quidditch-Sophomore-Engineering-New York, NY
Zach was a major force on the chaser offense, leading the team in goals scored and helping secure two wins for the Flying Dutchmen. He has proven to be indispensable, playing multiple positions including chaser, seeker, and keeper. Congratulations to Zach! 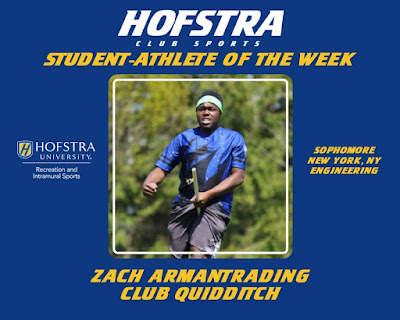 Hofstra’s 28 Club Sports are always looking for new members and welcome all experience levels.  If you would like to find out more information about joining one of our clubs, please visit hofstra.edu/recreation and click on the ‘Club Sports’ tab, or feel free to visit us at the Hofstra Fitness Center with any questions you may have!
Zachary Englis, Guest Blogger
Graduate Assistant, Recreation and Intramural Sports
Posted by Shaun Fean, Associate Director of Campus Recreation at 2:38 PM