Hofstra Club Roller Hockey traveled to Feasterville, Pennsylvania on Friday, March 3rd and Saturday, March 4th, to compete in the 2017 ECRHA Championships.  The DIII team went 1-2 finishing 4th at regionals, losing their first two games to Cortland, 4-1, and Rowan, 5-3. They finished the weekend by beating Northeastern, 7-4. Nicholas Powers led the team in points over the 3 games with 5 (1 goal and 4 assists). Ryan McCallen, Eli Vailancourt, and Shaun Randazzo all had 2 goals apiece.


Hofstra Equestrian Club traveled to Bergen County Equestrian Center in Leonia, New Jersey to compete on Saturday, March 4th. Captain Maria Sorrentino started the day with fifth-place finishes in her open class over fences and on the flat. Captain Kate Milford followed in her novice classes with a third-place finish over fences and a fourth-place finish on the flat. Walk trot canter riders did just as well, with Katie Rozek placing second, Meghan Tierney placing fourth, and Hannah Matuszak placing fifth. Finally, Katie Tomasino had a beautiful ride but unfortunately did not place.

Hofstra Men’s Club Ultimate Frisbee traveled to Atlantic City, New Jersey to take part in the Atlantic City Invitational on Saturday, March 11th and Sunday, March 12th. The Flying Dutchmen came in as the #10 seed in a 12-team tournament. Hofstra would have a solid first day by going 3-0. This was highlighted by a rare universe point win, Ultimate Frisbee’s version of sudden death, against a strong Fordham team. Hofstra would continue their dominance as the Flying Dutchmen went 2-0 to advance to the semifinals. Hofstra would lose in the semifinals, but still exceeded expectations coming into the tournament by finishing fourth overall. Captains Gabe de Oliveira, Brian Kelly, and Joe Murphy led the team well and were instrumental in helping the team outperform its initial seeding. Sophomore Ian Weimer also had a phenomenal tournament by playing strong defense and offense.

Hofstra Club Volleyball ventured west on Hempstead Turnpike to take part in a tournament against Division II and III schools at Molloy College in Rockville Centre, New York, on Sunday, March 12th. This was the first time the Pride stepped on the court against this level of play. The Women’s team went 0-8 and the Men’s team went 1-7. Despite the records, the team is looking to take their competitive experience and work to improve in their next match.


A dedicated member of Hofstra Equestrian, Kate has developed into a solid rider for the Pride. Over the weekend, at Country Farms Polo in Medford, New York, she qualified for regionals for the walk trot canter class! Congratulations to Kate! 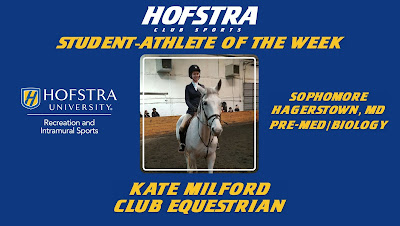 
Join us in conquering children’s cancer!


Feel free to become a member of our team and/or donate to a great cause: https://www.stbaldricks.org/teams/HofstraRecreation