After being snowed out of their first home tournament, Hofstra Quidditch took the field for the first time on the Intramural Fields at Hofstra on Saturday, February 25th. Their first match was against Long Island rival, Stony Brook University. It was a hard-fought match from both sides with quaffle points being traded throughout the match. Hofstra would prevail when Robert Levinson snagged the snitch to secure the victory and add 30 extra points. The final score was 160* - 90.
Hofstra next took on the Macaulay Marauders in a very physical match. Brenden Miller was able to hold down the defense by maintaining bludger control for the majority of the game. Despite solid play, Hofstra lost by a snitch grab, 130* - 90.

In their final game of the day, Hofstra took on the Jetpack Ninja Dinosaurs. The game was very heated to start, but once the snitch came on the pitch, Hofstra’s chaser offense exploded with Amy Mu scoring behind the hoops consistently. Hofstra widened their point differential with a snitch grab by Nathan Schwartz securing the victory, 160* - 90.

Hofstra Men’s Club Lacrosse opened their season with a doubleheader against Sacred Heart University and Monmouth University on Saturday, February 25th at Shuart Stadium. In Hofstra’s first game against Sacred Heart, the Pride came out of the gates hot and dominated for most of the game, securing the victory 13-5 over the Pioneers. Mike Fitzpatrick, Mike Benvenutti, Ryan Garry, and Bryce Todd all contributed two goals each for the Pride.

In their second game of the day against the Hawks of Monmouth University, the Pride started off slow before storming back for a 9-6 victory.

Hofstra Club Running traveled to Harvard University in Cambridge, Massachusetts on Saturday, February 25th to compete in the Harvard College Running Club Indoor Invitational. Mitch Holson had the best day for the Pride, capturing a 2nd place finish in the men’s long jump with a distance of 20 feet. The men’s 4x400m relay of Ryan Connell, Andrew Grell, Adel Elkosh and Mitch Holson finished just outside the top 10 with a time of 4:01.

Hofstra Men’s Club Rugby traveled east to Stony Brook University on Sunday, February 26th to take on the rival Seawolves. In a developmental scrimmage, the two teams played three 25 minute periods. Hofstra found the try-zone three times in the opening period to take an early lead, with Josh Beck, Ian Budding and Kyle Novak all contributing tries. Despite limited early season practice, the Pride defense held up well allowing only two Seawolves scores throughout the day. Josh Beck would add a second try, to help lead the Pride to their first pre-season win.

Hofstra Women’s Club Ultimate Frisbee traveled to New Windsor Township, New Jersey to compete in the “Bring the Huckus Tournament” on Saturday, February 25th and Sunday, February 26th. On Saturday, the Pride went 3-1, beating Drexel University, Ithaca College, and New York University by scores of 10-1, 13-1, and 9-4, respectively and losing a close match to The College of New Jersey by a score of 9-8. On Sunday, the women were back in action and went 1-2 on the day. The Pride beat the Jersey Devils, 9-3, but lost to Carnegie Mellon University and Lehigh University by scores of 10-5 and 6-5, respectively. The Pride were led by Captains Rachel Beaton and Kelsey Kresge who earned 16 and 28 assists, respectively.

Hofstra Women’s Club Lacrosse took on Central Connecticut State University in their first game of the Women’s Collegiate Lacrosse Associates 2017 season on Sunday, February 26th at Shuart Stadium. Lead by Jessie Allendorf and Zoe Szczotka, who each scored three goals for the Pride, Hofstra would win their first game by a score of 12-5. Linnea Barbour would add two goals of her own and Lauren Mastrianni, Maddie McDonagh, Sabrina Michael-Duncan, Mikayla Ruthig would each tally a goal for the Pride.

Mitch Holson-Club Running-Freshman-Cinematography-Frederick, MD
Mitch Finished 2nd in the Long Jump at the Harvard Invitational on Saturday, February 25th with a jump of 20 feet. Congratulations to Mitch! 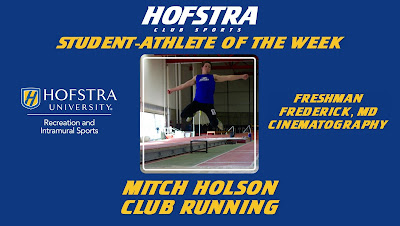 Hofstra’s 28 Club Sports are always looking for new members and welcome all experience levels.  If you would like to find out more information about joining one of our clubs, please visit hofstra.edu/recreation and click on the ‘Club Sports’ tab, or feel free to visit us at the Hofstra Fitness Center with any questions you may have!
Zachary Englis, Guest Blogger
Graduate Assistant, Recreation and Intramural Sports
Posted by Shaun Fean, Associate Director of Campus Recreation at 10:31 AM