The weekend of February 17th-19th was full of exciting and historic events for both the Hofstra Club Ice Hockey and Hofstra Club Roller Hockey’s DI and DIII teams.


Hofstra Club Ice Hockey met St. Thomas Aquinas College for an exhibition game under the bright lights of the Barclays Center in Brooklyn, New York on Sunday, February 19th. The game was live streamed on the Hofstra Recreation Facebook page. The game got off to a quick and physical start. STAC was able to jump on the board early in the first period to take a 1-0 lead heading into the second period. The second period was controlled by a huge offensive wave by the Pride, but they only were able to capitalize on one goal by Eli Vaillancourt, which knotted the score at one going into the third period. STAC would score early in the final period and then again nearly ten minutes later to take a 3-1 lead. Pat Greaney would help close the gap for Pride by scoring towards the end of the game, but there wasn’t enough time left for Hofstra to complete the comeback. The final score was 3-2.


Hofstra Club Roller Hockey’s DI and DIII teams played their final home weekend of the season on Friday, February 17th and Saturday, February 18th at Skate Safe America in Old Bethpage, New York. The DI team kicked off the first of five games against West Chester University, which was aired live on the Hofstra Recreation Facebook page. Much of the first period was played at an even pace. The first goal scored by West Chester was a penalty shot, which really deflated the excellent pace played by the Pride to that point. West Chester would finish the period with a commanding 3-0 lead. Without a goal by either team in the second, the Pride were down to their final twelve minutes in the third period. West Chester would add another goal, to make their lead four, and Andrew Gagnon would erase the shutout to put the Pride on the board. The final score was 4-1 in favor of West Chester.

The next morning the DI team was back in action against Robert Morris University. Andrew Gagnon would continue his scoring ways from the previous night to give the Pride a 1-0 lead after one period of play. Danny Correia, Nigel Grove, and Andrew Gagnon would all score in the second period to extend the Pride lead to four. The third period saw an offensive explosion by both squads. The Pride would maintain their pace by scoring an additional three goals to answer the Colonials’ three goals. Scoring for the Pride in the third period were Nigel Grove twice, to complete his hat trick, and Nick Lewis. Hofstra defeated Robert Morris, 7-3.


At noon on Saturday, the DIII team took the rink against Neumann University. Neumann scored 2:35 into the first period, which was answered less than two minutes later by the Pride’s Steven DiFiglia. Before the first period ended, Neumann would score twice, taking a 3-1 lead into the second. In the second, both teams would score three times. Ryan Kelly, Ryan McCallen, and Eli Vaillancourt would all net goals for the Pride, but Neumann still held the lead, 6-4. In the third period, Anthony Accardi would score for the Pride, but it wasn’t enough to secure the win as Hofstra fell to Neumann, 8-5.


The DIII team would have a rematch against Neumann University just four hours later. The first period saw Neumann score first followed by Brian Darmstadt scoring for the Pride. Neumann would take a 3-1 lead into the second. Despite a Hofstra goal by Anthony Accardi, Neumann would add five goals of their own in the second to extend their lead and take an 8-2 lead into the final period of play. In the third period, Matt Tavernite would score a power play goal for the Pride and Steven DiFiglia would net an even strength goal, but it wasn’t enough to beat Neumann, as the Pride fell by a score of 10-4.


In the fifth and final game of the weekend, the D1 team took on the Knights from Neumann University. The first period saw Neumann dominate with five unanswered goals. The Knights would answer their five goals with another five in the second, with the Pride scoring once by Andrew Gagnon on the power play. That would do it for the Pride on offense, as Hofstra fell to Neumann by a score of 12-1.


The DIII team’s next game will be at the 2016-2017 ECRHA Championships in Feasterville, Pennsylvania against SUNY Cortland.


Austin plays a solid defensive game and leads the Pride as their captain on the ice and their president off the ice. He has helped rebuild Club Ice Hockey and was a major force in securing the opportunity for Hofstra to play on the New York Islanders’ home ice at Barclays Center. Congratulations to Austin! 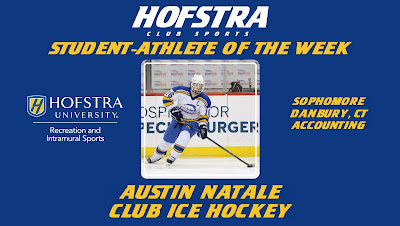