Club Ice Hockey traveled to Sport-O-Rama in Monsey, New York on Friday, February 2nd to take on St. Thomas Aquinas College. Matt McGuirk opened up the scoring in the second period with a power play goal to give the Pride a 1-0 lead. STAC quickly answered with two goals, only to be followed up by a goal from Hofstra’s Zack Lamberti to knot the score at 2-2 after two periods. In the third, the Pride clearly took over play, as defenseman James Carroll would net the game winner, followed by two insurance goals by Austin Natale to give the Pride a 5-2 win.

The following night, Saturday, February 3rd, the Pride hosted SUNY Maritime at the Northwell Heath Ice Center in East Meadow, New York. This game would be critical, with Maritime and Hofstra battling for the last playoff spot. In the debut of their new alternate jerseys, Hofstra came out slow once again and the first period ended with no score. In the second, Maritime came out and scored 3 goals and the Pride were unable to answer, with their playoff hopes beginning to look dim.  After regrouping in the intermission, Hofstra came out flying in the third, with Matt McGuirk scoring a goal 20 seconds into the period. Two minutes later, Andrew Gagnon tallied a cross crease pass to pull the Pride within a goal at 3-2. Gagnon would follow with another goal just two minutes later, this time on the power play, to level the game at 3-3. Maritime would follow with an offensive flurry, but goalie Liam Hartenstein was brilliant in net, keeping the score tied at 3-3. With 7 minutes left in the game, Hofstra’s Matt McGuirk would net the game winner to give Hofstra the 4-3 victory. The victory secured Hofstra a spot in the post season for the first time since 2008.

On Wednesday, February 7th, Hofstra hosted St. Thomas Aquinas College at the Northwell Health Ice Center. Hofstra came out slow as STAC would score two quick goals, but Hofstra would answer later in the period with goals by James Carroll, Collin Ewald, and Matt McGuirk, and the first period ended with the teams tied at 3-3. From there, it was an offensive onslaught for the Pride, as they would claim a 12-8 victory behind a hat trick from Ewald, two goals apiece from McQuirk, Carroll and Matt Strejlau, and goals from Eli Vaillancourt, Andrew Gagnon, and Kevin Lavrado. Goaltender Billy Krause notched his first win in net as a member of the Pride.

In the final game of the regular season on Friday, February 9th, the Pride took on the United States Merchant Marine Academy at the Northwell Health Ice Center. Behind another hat trick from Collin Ewald, and goals from Andrew Gagnon (2), Darren Schwartz (2), Matt McGuirk, Darren Schwartz, and Patrick Greaney, the Pride beat the Mariners 10-4.

Hofstra will take on Fordham University in their first round MCHC playoff contest at 4:40pm on Saturday, February 17th at the Dix Hills Ice Arena-come out and support the Pride!

Club Roller Hockey traveled to North Arlington, New Jersey on Saturday, January 27th and Sunday, January 28th to participate in an Eastern Collegiate Roller Hockey Association tournament. The Division 2 team went 0-2-1 on the weekend against Syracuse, Oswego and Yeshiva.  The team has two games remaining on February 17th at home against RIT and Oswego, which they must win in order to qualify for the playoffs.

Club Billiards traveled to Baldwin Billiards in Baldwin, New York on Sunday, February 11th for their weekly match. New player and rising star Steve Jacobovitz played a solid set of games and his overall record is now 9-1. Kevin Gomes and James Reilly also came away with wins for the Pride. Overall, Hofstra came away with the match win 7-6.

In the final two games of the regular season, Ewald was able to catch fire against St. Thomas Aquinas College and the Merchant Marine Academy, netting two separate hat tricks to lead the Pride to their first playoff berth in ten years. 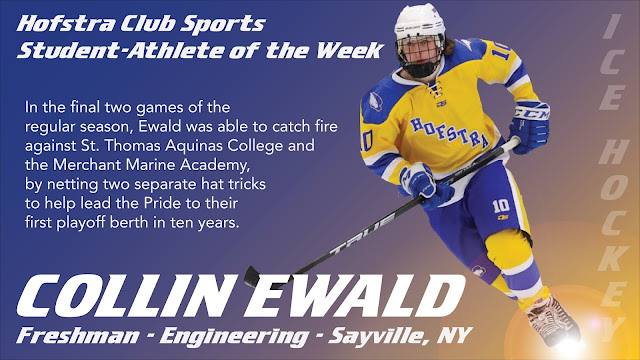 Posted by Shaun Fean, Associate Director of Campus Recreation at 11:12 AM