Club Ice Hockey traveled to Dix Hills Ice Arena in Dix Hills, New York to take on the Fordham Rams in a matinee playoff game on Saturday, February 17th in the first round of the MCHC Playoffs. This was Hofstra’s first appearance in the playoffs in 10 years, and the Pride had a solid crowd of support to cheer them on. Despite the energized Hofstra crowd, the Pride were unable to overcome outstanding goaltending by Fordham and the Pride fell to the Rams 3-0. Tremendous goaltending by Hofstra’s Liam Hartenstein kept the game close. The loss capped off a phenomenal season by the Pride.

Club Roller Hockey competed in Sewell, New Jersey on Saturday, February 10th. The Division 4 team continued their great season with wins over Farmingdale (4-1), St. Joseph’s (2-1 OT), and Millersville (5-2). Sam Reynolds had a 1.33 GAA and a .952 save percentage for the weekend, Ryan McCallen had three goals and two assists, and Liam Spisak had two goals and two assists. The D4 team has established themselves as a legitimate title contender as the Pride move closer to Regionals.
This past weekend, the Division 2 and Division 4 Roller Hockey teams held their home weekend in Old Bethpage, New York. The D2 team finished their regular season with two losses against RIT and Oswego. The D4 team went 3-1 on the weekend with wins over Farmingdale, Cornell and Vermont before falling to St. Joseph's to finish off the regular season. D4 goalie Sam Reynolds participated and won the All-Star Game Goalie Skills competition, competing against other goalies across all divisions.

Club Women’s Soccer traveled to Montclair State University in Montclair, New Jersey on Sunday, February 18th to take part in a tournament against two sides from Montclair and The College of New Jersey. The Pride fell to Montclair Team One 2-1, with Hannah Carmeli scoring the lone Hofstra goal. In their second game, the Pride lost 1-0, with excellent defense played by Melissa Medina. In their final game of the day, Hofstra lost to TCNJ by a score of 3-0.

Club Billiards won their weekly match by a score of 8-5. Colin McGuire, Victoria Wettmore, and TJ Murphy each won their individual matches.

Not only did Sam win the ECRHA D3/D4 All Star Shootout competition with 13 saves out of 15, but he also went 3–1 this past weekend for the Pride. Sam has been stellar all season long for the Division 4 Hofstra Roller Hockey team, who is the #2 seed heading into the ECRHA D4 Regional Championships. 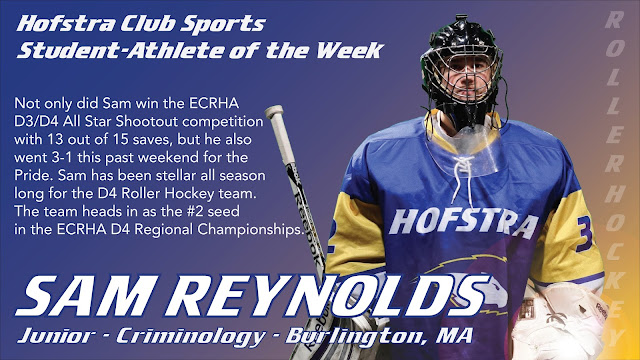 Hofstra’s 26 Club Sports are always looking for new members and welcome all experience levels.  If you would like to find out more information about joining one of our clubs, please visit hofstra.edu/recreation and click on the ‘Club Sports’ tab, or feel free to visit us at the Hofstra Fitness Center with any questions you may have!
Posted by Shaun Fean, Associate Director of Campus Recreation at 7:00 AM