Women’s Club Lacrosse hosted New York University and Stony Brook University on Saturday, October 20th at the Hofstra Field Hockey Stadium in the 3rd Annual Marc Sieben Tournament. In their first game, Hofstra defeated NYU 13-6, thanks to a pair of goals each from Mikayla Ruthig, Haylee Molloy, Alyssa Murphy and Jenn Farrar. Hofstra would go on to defeat Stony Brook 8-6 in their second game, behind a hat trick from Zoe Szczotka. Jessie Allendorf and Allison Shamir each added 2 goals to fuel the victory. To cap of the day, Hofstra played their Alumni team in a fun and entertaining game.
Club Ice Hockey pushed their MCHC record to 4-0 with a 6-3 with over SUNY Maritime on Saturday, October 20th.  Vinny Cacciatore notched two goals for the Pride, with Chris Serio, Brandon Fauci, Antonio Binotto, and Collin Ewald also scoring for Hofstra. The club’s next game is Friday, October 26th at the Prudential Center in Newark, New Jersey against Stevens Institute of Technology. 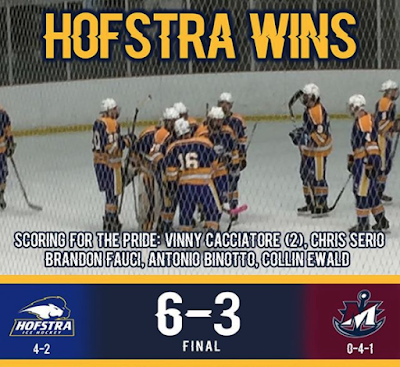 Club Running traveled to Jamaica, New York on Sunday, October 21st for the St. John’s University Track Club Pumpkin Challenge. The first meet of the season was cold and windy, but that didn’t stop Colleen Todd, who ran a 24:20 in the 5k, finishing 4th overall. Hofstra competed against St. John’s, Stony Brook, Columbia and Delaware and next travels to Milton, New York for the NICRA Northeast Regional Meet on Sunday, October 28th.

Club Men’s Rugby ventured to Rensselaer Polytechnic Institute in Troy, New York on Sunday, October 21st for a quarterfinal matchup in the Tri-State Rugby Conference Playoffs. Hofstra got off to a fast start behind tries from Joe Ovile and Raymond Brown, but they were not able to sustain their attack and ultimately dropped the contest by a score of 45-15, ending a successful season for the Pride.

Club Softball trekked to UMass Amherst on Sunday, October 21st to play a tripleheader. The Pride would take two out of three from the Minutewomen, with Robbi Reed’s pitching and Sara Bornstein’s bat leading the way. The club’s next series is Saturday, November 10th at Sacred Heart University.


Club Climbing traveled to Gardiner, New York for a weekend long outdoor camping trip beginning on Friday, October 19th.  The club was able to try many of the outdoor courses and scrambled on some of the boulders to experience the outdoor setting. Overall, 14 members attended the successful trip.


Cacciatore scored two goals to lead Hofstra to a 6-3 victory over SUNY Maritime, pushing the Pride's record to 4-0 in the MCHC. 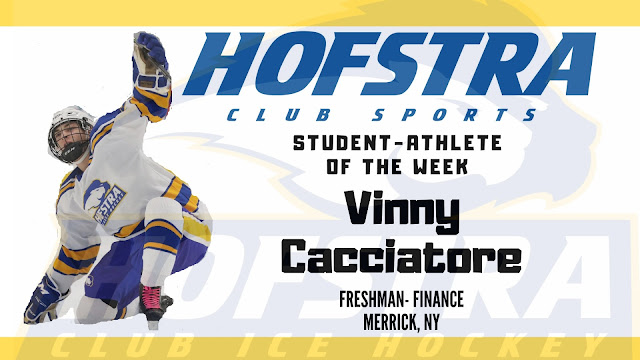 Hofstra’s 25 Club Sports are always looking for new members and welcome all experience levels. If you would like to find out more information about joining one of our clubs, please visit hofstra.edu/recreation and click on the ‘Club Sports’ tab, or feel free to visit us at the Hofstra Fitness Center with any questions you may have!
Posted by Shaun Fean, Associate Director of Campus Recreation at 7:12 AM