Club Baseball hosted Rensselaer Polytechnic Institute for a doubleheader at University Field on Saturday, March 30th. In Game 1, Stephen Locorriere pitched 6 shutout innings, allowing only 2 hits and striking out 9 to lead Hofstra to a 1-0 win. In Game 2, the Hofstra offense exploded for 9 runs in the 4th inning to propel the Pride to a 16-11 victory.

The team next hosted 3 games against Fordham University at University Field on Saturday, April 6th and Sunday April 7th. The Pride would unfortunately drop all 3 contests on the weekend by scores of 9-8, 12-3, and 8-3.


Club Billiards had a successful tournament in the Hofstra Game Room on Friday, March 29th. Steven Jackobovitz defeated Tim Murphy 5-1 in the finals of the 9-ball tournament.


On Sunday, March 31st the club traveled to Raxx Pool Room for an APA League match and won a close match, 7-6. Zaviel Young won his match with a shutout.


The club also voyaged to Brooklyn Boulders Queensbridge on Saturday, April 6th, with 30 members focusing on bouldering. Bouldering refers to climbs that are protected by pads rather than ropes.

Kate Milford represented Club Equestrian well in the Novice Flat Class at the IHSA Regionals held at the Good Shepherd Farm on Sunday, March 31st. Overall the team finished 8th out of 11 schools in the region.


Club Men’s Lacrosse hosted their alumni players on Saturday, March 30th at Shuart Stadium. The current team was able to hold off the challenge from the alumni, winning the game by a score of 14-9.

On Sunday, March 31st, the Pride traveled to Rutgers University to take on Rutgers and Villanova. The team would come up short in both contests, losing to Rutgers 5-4, and falling to Villanova 7-4.

The team next traveled to Fordham University on Friday, April 5th with a playoff spot on the line. Ryan Garry scored for the Pride with less than a minute remaining to knot the game at 6-6 and force overtime before Kyle Anderson scored to give Hofstra a 7-6 victory and send them to the NCLL Playoffs.

On Sunday, April 7th, the club hosted Fairfield and Stony Brook at Shuart Stadium for the Joe Ferriso Classic. Hofstra dropped the first game to Fairfield by a score of 8-3, before rebounding to defeat Stony Brook 12-3. The club then celebrated with a BBQ after the game to honor their late club member.

Club Men’s Rugby traveled to Vassar College in Poughkeepsie, New York on Sunday, April 7th for a chance to qualify for the USA Rugby National 7s Tournament in Tucson, Arizona. After dominating pool play with a 3-0 record, Hofstra defeated Seton Hall 37-0 in the Quarterfinals. In the semifinals, the club faced the reigning champions, William Paterson University. The club would fall to the Pioneers, who went on to win their 3rd straight championship, by the score of 34-5.

Club Women’s Rugby hosted the 10th Annual Gohring Tournament at the Hofstra University Rugby Pitch. Stony Brook, Marist, and a Hofstra Alumni side all participated in the tournament. While Hofstra would go winless on the day, the highlight of the day was the dedication of a plaque and tree adjacent to the Hofstra Intramural Rugby field in the name of the late team member Jessica Gohring.

Club Men’s Soccer dropped a 1-0 decision to Adelphi University on Sunday, March 31st at the Hofstra Soccer Stadium. Freshman Goalie Joe Ronzetti was a stalwart in net for the Pride throughout the game.

Club Ski and Snowboard visited Montage Mountain on Saturday, March 30th for their first trip of the semester. Despite relatively unfavorable conditions, the club had 14 members in attendance and helped the beginners learn how to ski and/or snowboard.

Club Softball traveled to Fordham University for a tripleheader on Sunday, March 31st. Hofstra would take 2 out of 3 games on the day, winning Game 1 10-8 behind the strong pitching of sisters Kat and Robbi Reed, and claiming Game 3 by a score of 13-1, propelled by a 3 home run performance from Taylor Russnak.

Club Women’s Lacrosse visited Fordham University on Saturday, March 30th to take on the Rams. Zoe Szczotka scored five goals and Allison Shamir added two goals, but the Pride would ultimately fall by a score of 14-9.

The team next visited Yale University on Saturday, April 6th to play both Yale University and Clark University. Hofstra would defeat Clark by a score of 8-4 behind 11 saves by Maddy Lustberg and goals by Jessie Allendorf (3), Allison Shamir (2), Zoe Szczotka (1), Maddie McDonagh (1), and Sabrina Michael-Duncan (1). The team would also triumph over Yale by a score of 7-6, with goals coming from McDonagh (2), Shamir (2), Allendorf (1), Michael-Duncan (1), and Grace Giannatsis (1). Maddy Lustberg was solid again in the cage for Hofstra with 11 saves.

On Sunday, April 7th, the club hosted NYU for their Senior Day game at Shuart Stadium. The team would again come out on top with an 11-4 victory, sparked by goals from Szczotka (3), Shamir (3), Allendorf (1), McDonagh (1), Michael-Duncan (1), Mikayla Ruthig (1), and Alyssa Murphy (1). Maddy Lustberg and Emily Turrini combined for 11 saves on the day.

Club Quidditch hosted a tournament on the Hofstra Intramural Fields on Saturday, March 30th. The team posted a 2-1 record on the day, notching wins over Rutgers and NYU. 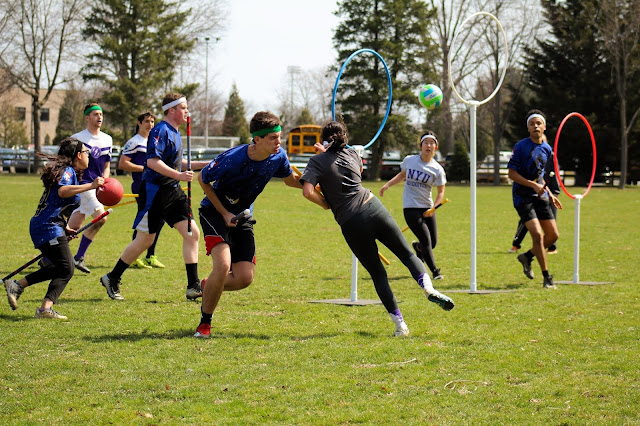 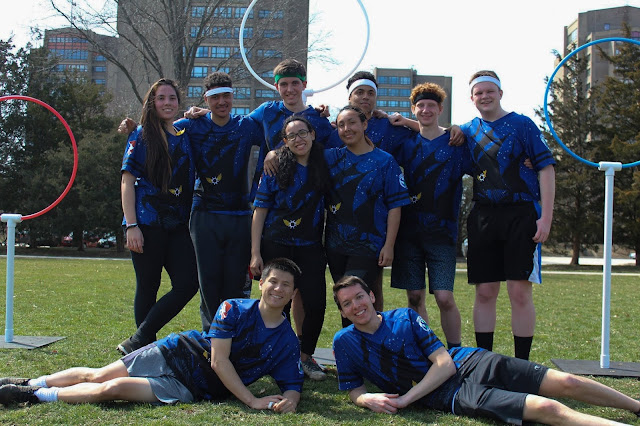 Club Men’s Ultimate also participated in the Strong Island Tournament on Saturday, March 30th and Sunday, March 31st. The men finished 4th in their tournament, including an impressive 3-0 record during pool play. The highlight of the tournament was a 10-9 comeback win against UMass Lowell in the quarterfinals. 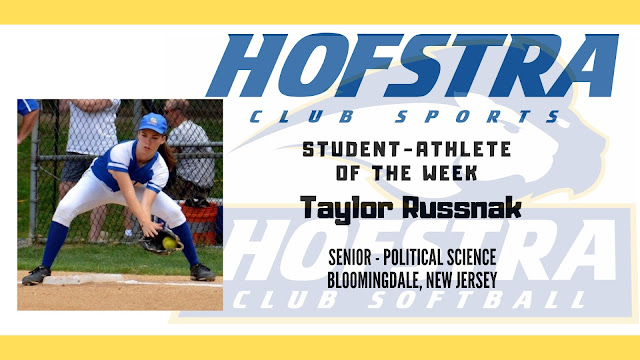 Hofstra’s 26 Club Sports are always looking for new members and welcome all experience levels. If you would like to find out more information about joining one of our clubs, please visit hofstra.edu/recreation and click on the ‘Club Sports’ tab, or feel free to visit us at the Hofstra Fitness Center with any questions you may have!
Posted by Shaun Fean, Associate Director of Campus Recreation at 10:59 AM