Club Baseball hosted a doubleheader against Siena College at University Field on Saturday, March 23rd. Despite dropping both games, there were bright spots for Hofstra. Anthony Speelman shined for the Pride, going 4-7 with a triple and 3 RBIs while playing great defense at shortstop. Tyler Symington caught both games behind the plate while going 3-6 with a run scored. The team next hosts RPI for a doubleheader at University Field on Saturday, March 30th at 12pm.

Club Men’s Ultimate traveled to Prospect Park in Brooklyn for an 8-game tournament on Saturday, March 9th and Sunday, March 10th. The club posted a 2-6 record, defeating Cornell University and Tufts University. The Dutchmen significantly improved their level of play from last season, battling each game to the final minute.

Club Women’s Ultimate hosted a 4-team tournament on Saturday, March 9th on the Hofstra Intramural Fields. Despite going 0-3 in pool play, the team was happy with their early season performance.

Club Billiards visited the Raxx Pool Room on Sunday, March 10th for a tournament, in which the club won by a score of 9-5. Andrew Sciglimpaglia, Danny Pires, Tim Murphy, and Zach Cedar won their matches.

The club was next in action on Sunday, March 17th at Raxx Pool Room. The club won by a score of 11-1 with all 5 members winning their matches.

Club Men’s Rugby opened their season on Saturday, March 9th, hosting Molloy College on the Hofstra Intramural Rugby Field. Although the game was developmental, the team dominated Molloy for all 3 games of Sevens.

Club Women’s Rugby made the journey to Siena College on Sunday, March 10th for a day of Sevens Rugby. The team played 6 games on the day, posting a 2-3-1 record.

The team next traveled to Montclair State University in New Jersey on Sunday, March 24th. Hofstra played 4 Sevens matches, posting a 1-3 record. Karleigh Groves, Alexa Jimenez, Samantha Dickie, and Emma Husk all scored tries for the Pride in their victory.

Club Women’s Lacrosse traveled to Stony Brook University on Sunday, March 10th, losing to Marist College (8-6) and Stony Brook (10-4). Zoe Szczotka scored three goals for the Pride in their loss to the Red Foxes, while Maddie McDonagh notched two goals in the defeat to the Seawolves.


Club Climbing traveled to Brooklyn Boulders Gowanus on Saturday, March 9th with 30 members in tow. Two members got belay certified and with all members working on climbing harder courses.


On Saturday, March 16th, the club visited The Cliffs at Long Island City for a competition. Danny Pires, Evan Blake, Jeremy Robinson, and Ryan Kozhimala competed in bouldering with a variety of challenging routes.


Club Ice Hockey hosted their Alumni Game at the Northwell Health Ice Center at Eisenhower Park on Saturday, March 23rd. Over 40 alumni returned to participate in the game, which served as a very successful fundraiser for the program.


Milford has served as the President of the Hofstra Club Equestrian team for 3 years, while also excelling in competition. She will represent Hofstra at the IHSA Regional competition next month. 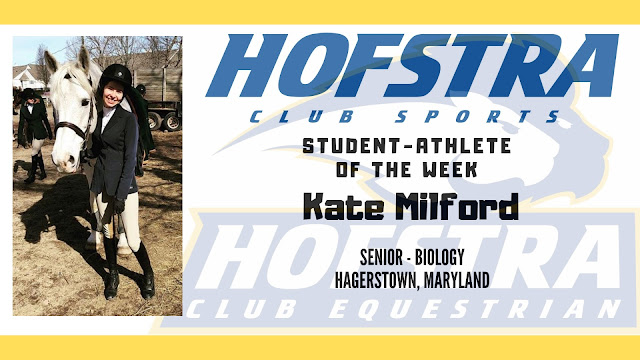 Hofstra’s 26 Club Sports are always looking for new members and welcome all experience levels. If you would like to find out more information about joining one of our clubs, please visit hofstra.edu/recreation and click on the ‘Club Sports’ tab, or feel free to visit us at the Hofstra Fitness Center with any questions you may have!
Posted by Shaun Fean, Associate Director of Campus Recreation at 12:23 PM