Club Ice Hockey faced off against Stevens Institute of Technology at the Dix Hills Arena on Saturday, February 23rd in the first round of the MCHC playoffs. Despite trailing 3-0 heading into the final period, the Pride would not quit. Andrew Gagnon started the comeback with seven minutes left, quickly followed by Antonio Binotto who tallied another goal to make the score 3-2. With 40 seconds left in the game, Vinny Cacciatore scored the game-tying goal to send the game to overtime. Binotto would be the hero for Hofstra, cashing in again in overtime to give the Pride a 4-3 victory and send them to the championship game.

On Sunday, February 24th, Hofstra took on top-seeded Fordham University at the Dix Hills Arena in the MCHC Championship. Again facing a late 3-2 deficit, Collin Ewald netted the game-tying goal to send the game into overtime. Hofstra was not as fortunate on this night, as Fordham prevailed 4-3 in OT. Despite the loss, it was a tremendously successful season for the club.

Club Men’s Lacrosse hosted Sacred Heart University and New York University on Sunday, February 24th at Shuart Stadium. Despite holding a 5-2 lead in the second half, the Pride would ultimately fall to Sacred Heart by a score of 6-5 in overtime. Ryan Garry led Hofstra with 4 goals.

Hofstra would bounce back in a big way later in the day against NYU, posting a dominant 10-4 victory. Hofstra next travels to Monmouth University on Sunday, March 3rd for a round robin with Monmouth and Ramapo College.

Club Women’s Lacrosse hosted Quinnipiac University at Shuart Stadium on Saturday, February 23rd, falling by a score of 10-6. Zoe Szczotka scored 2 goals for the Pride, while Allison Shamir and Mikayla Ruthig each added a goal and an assist.

On Sunday, February 24th, the Pride traveled to Sacred Heart University to take on the Pioneers. Despite 4 more goals from Zoe Szczotka, Hofstra would drop a 10-7 decision. Maddie McDonagh, Mikayla Ruthig and Sabrina Michael-Duncan each scored a goal for the Pride. The Pride are back in action on Saturday, March 2nd at Stony Brook University.

Club Billiards hosted a tournament in the Hofstra Game Room on Friday, February 22nd. The club had 8 members in attendance, two of which, Zaviel Young and Andrew Scimlimpaglia, faced off in the finals. Young won 4-3.

On Sunday, February 24th, the club traveled to Baldwin Billiards for an APA League match. The team would drop a 9-4 decision despite wins from Zach Cedar and Zaviel Young.

Club Quidditch traveled to Rutgers University on Saturday, February 23rd for their first tournament of the spring. The highlight of the tournament was defeating the NYU Pigeons by a score of 210-20.

Club Climbing climbed at Brooklyn Boulders on Saturday, February 23rd with 31 members in attendance. The club will next visit the Cliffs at Long Island City on Saturday, March 2nd.

Despite never having played lacrosse before coming to Hofstra, Baker has developed into a shutdown defender for the Pride, anchoring a strong Hofstra defense in two close losses this past weekend. 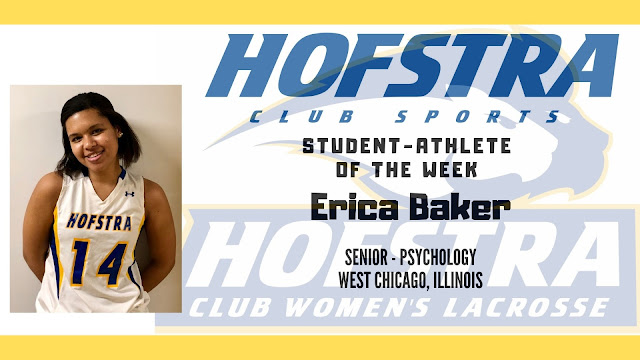 Hofstra’s 26 Club Sports are always looking for new members and welcome all experience levels. If you would like to find out more information about joining one of our clubs, please visit hofstra.edu/recreation and click on the ‘Club Sports’ tab, or feel free to visit us at the Hofstra Fitness Center with any questions you may have!
Posted by Shaun Fean, Associate Director of Campus Recreation at 7:22 AM