Club Roller Hockey earned a bid to play in the Eastern Collegiate Roller Hockey Association Regionals in Feasterville, Pennsylvania on Friday, March 1st and Saturday, March 2nd. The team went 1-2 on the weekend, posting a 7-0 victory St. Joseph’s College (NY), while dropping decisions to Yeshiva University (6-2) and Temple University (7-6 OT). Andrew Gagnon tallied 5 goals for the Pride on the weekend, including a hat trick in the win over St. Joseph’s. The team has earned a bid to the National Collegiate Roller Hockey Championship, which will take place from April 10-14 in Rochester, New York.

Club Men’s Lacrosse traveled to Monmouth University on Sunday, March 3rd for games against Monmouth and Ramapo College. Robby Zacharias’ 5 goals led the team to a 15-0 blowout victory over Ramapo, as the defense put the clamps on the Roadrunners offensive attack. The next game against Monmouth was a much closer affair, with the Hofstra defense again performing strongly to lead the team to a 4-2 victory. The team will head upstate this weekend to take on the University of Albany.

Club Running participated in the Harvard Running Club Invitational on Saturday, March 2nd. Ryan Connell was the best performer for the Pride, finishing 9th in the Men’s 800 meter with a time of 2:07.5.

Club Climbing traveled to the Cliffs at Long Island City on Saturday, March 2nd for another successful climb. 30 members were in attendance, with some former alumni members joining in on the fun. The club will climb again on Saturday, March 9th at Brooklyn Boulders Gowanus.

Club Billiards visited Baldwin Billiards on Sunday, March 3rd for a match. Despite losing 7-6, Zach Cedar and Steven Jacobovitz were able to secure victories for the Pride in their matches.

Lamberti has been a brick wall in goal for the Pride this season, posting a 3.25 goals against average so far on the season. Lamberti also excelled this season as a member of the Club Ice Hockey team. 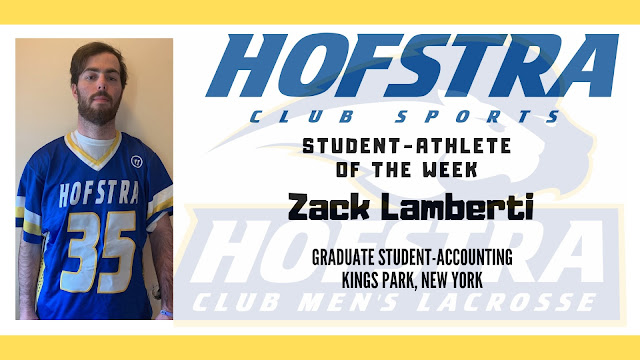 Hofstra’s 26 Club Sports are always looking for new members and welcome all experience levels. If you would like to find out more information about joining one of our clubs, please visit hofstra.edu/recreation and click on the ‘Club Sports’ tab, or feel free to visit us at the Hofstra Fitness Center with any questions you may have!


Posted by Shaun Fean, Associate Director of Campus Recreation at 6:33 AM