Hofstra at the Quidditch World Cup

The Quidditch World Cup is the largest, most competitive event in all of collegiate quidditch. This year's tournament, World Cup VI, was the hardest and most intense yet. Held in Kissimmee, Florida at the Austin-Tindall Park, the tournament featured 60 Division 1 teams from around the world, who qualified through their regional tournaments, in addition to 20 D2 teams. International teams included France, Mexico and Canada. This two-day tournament is the highlight of every quidditch team’s season. Practice, intense fundraising and many long hours of planning went into this one event. By the end of the hot and muggy two days, The University of Texas was crowned the winner of WORLD CUP VI after a great game against UCLA. 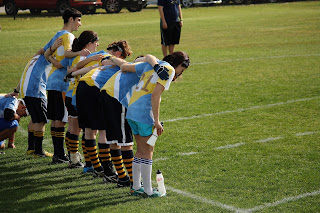 Hofstra Quidditch flew into Florida on Friday, April 12 at around 9:00 a.m. From there we went to one of 5 hotels that were approved by the International Quidditch Association. A day by the pool and a chance for everyone to get mentally prepared for the next two days ahead was all that mattered. As a very goofy team whose members is constantly joking around with each other, we often struggle with mental preparation, so the chance to relax and focus our attention on the coming days was much appreciated.

At the start of Day 1 of the Cup, we woke up at 5:30 a.m. and were out the door by 6:15 a.m. to catch a bus to the park. Upon arrival, we had made our own jerseys with a flying H on front and different yellow and blue designs, which reflected each player's position. We made these to show up wearing something new and to throw off our opponents who would look for our old jerseys. Shortly thereafter, we realized we forgot our banner, so some of our more adventurous male team members decided to paint HOFSTRA on their bodies. This seemed apropos for our team as we are never shy when it comes to doing something out of the ordinary. 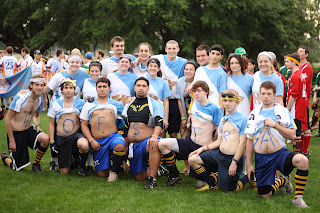 On Day 2, team morale was high. We were to play the University of Arkansas, who we thought to be a good if beatable opponent. Throughout the game, however, our team cohesiveness fell apart as we began to pile up red cards and yellow cards while our opponents kept their discipline.  Then, with our team trailing 30 to 40, they caught the snitch and our day was over. Our team played well, but we started off on the wrong foot and could not come back to win. Our team took this loss pretty hard but we still managed to enjoy the rest of the day and see some awesome quarter-final, semi-final and final quidditch matches for World Cup!

Despite everything, we had, for the first time in our team’s history, swept through our pool with a 4-0 record, on top of beating out hundreds of other teams simply to qualify for the tournament. Furthermore, we got to enjoy our last night in Florida at Harry Potter World. 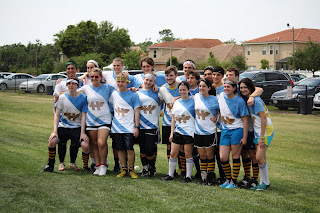 The IQA rented out Harry Potter World 8:00 p.m. to 11:00 p.m. for all Quidditch players, World Cup Staff, volunteers, and anyone else who was interested in coming . Now Quidditch has become filled with players who do not even like Harry Potter, but there are still those who hold it very close to their hearts. Putting hundreds of quidditch players in Harry Potter World was like putting children in Candy Land. The rides, food, butterbeer, Hogwarts Castle, The Three Broomsticks, and even the wand simulation were all masterfully done. Despite periods of rain, our entire team was in its glory.

This trip, however, was more about the friendship between the players of different teams than anything else. Something that the quidditch community shares above all else is a sense of belonging and camaraderie between all competitors. We are all friends regardless of what happens during an intense match.

Congrats to all of the Seniors who were involved with Hofstra Quidditch this season. Our team has many good days ahead and Quidditch has a whole is making strides each year. Mischief Managed. 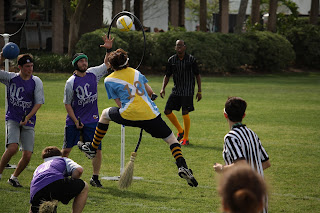 Written By Alyssa Michnevitz, Class of 2015

Photos By Amanda Salvucci, Class of 2013
Posted by Nolan Meditz at 1:58 PM