Who’s getting excited for the fall semester at Hofstra?! With two weeks to go we thought we’d kick it off with an exciting announcement—the first of a few updates to come relating to Hofstra’s Fall Festival: Alumni, Student and Family Weekend which will take place from September 27-29, 2013. Save the date!

As you may know, this year we will be bringing back the Out Loud comedy show which will be held on Saturday, September 28 starting at 9 p.m. in the Mack Sports and Exhibition Complex on Hofstra’s North Campus. We are very excited to announce that the person bringing laughter to the Hofstra community will be… AZIZ ANSARI! 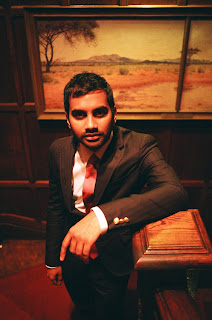 Family weekend passes, which offer the biggest savings, along with Out Loud and Vibe Live tickets for Hofstra family members and alumni are available for purchase now. For more information on Hofstra’s Fall Festival check out the website.

Student ticket information including special student pricing and purchase dates will be available at the start of the fall semester. (Family members should not purchase tickets in advance for their student). Check back soon!

This performance is sure to “pack the Mack” so tell your family members and alumni friends to purchase early!

*Out Loud comedy show is recommended for adult audiences only.

Aziz Ansari has quickly established his presence in the comedy world. He is currently starring in a popular television series, is developing a number of films and recently released his second hour-long standup special. The Hollywood Reporter said that he “has become one of the most prolific writers and performers on the comedy scene in recent years” and Rolling Stone placed him on the cover of a special comedy issue labeling him “the funniest man under 30.” In addition, Paste Magazine has named him one of the “Top 10 Comedians of the Decade.” Ansari also has the much buzzed about gig as host of the 2010 MTV Movie Awards.

Ansari co-stars opposite of Amy Poehler in the Emmy nominated NBC series, “Parks and Recreation,” which is currently in its fifth season. The series received its first Emmy nomination in 2011 for Outstanding Comedy Series. Ansari’s portrayal of government employee ‘Tom Haverford,’ has earned him much critical praise including Entertainment Weekly naming him one of their “Breakout TV Stars,” TV Guide naming him a “Scene Stealer” and Yahoo! TV placing him in the number one spot on their list of “TV MVPS: The Most Valuable Performers of the Fall Season.” People Magazine named him 2011’s “Funniest Dude in Prime Time.”

Click here for his full bio
Posted by Kerri Tortorella, Director of Communications/Student Affairs at 12:05 PM