H*INT is Hofstra International Student Organization. As an organization they seek to enhance the experience of international students by easing the transition process when they arrive to the Hofstra Community.   Their efforts can be highlighted by the various events that they’ve hosted throughout the years at Hofstra.  The organization is not limited to international students but welcomes all students: anyone who appreciates culture and any one that wants to know more about culture and people from other countries.

Fall 2013 has been one of the most successful for H*INT as a club. Having a wonderful e-board they were able to increase their membership, coordinate high profile events, and work successfully with various departments and faculty.  This club profile will provide detail for H*INT’s wonderful comeback!

They began the semester with introducing cultural shock and the concepts to the new international of being a Hofstra student.  They celebrated LGBTQ History Month by hosting a jeopardy event about LGBTQ.  H*INT also participated in this year’s Multicultural Mixer, hosted by the Multicultural and International Student Programs Office.   Their participation was essential by providing food for the event and a Bollywood inspired performance.  H*INT’s biggest event in the Fall semester was the Cultural Festival, in which clubs had the opportunity to participate and represent a country and compete to win a total of $250.00.  The club was able to fundraise a total of $250.00 to provide this as the winning prize.  The event concluded International Education Week, with an amazing turnout.  The Hofstra History Club won representing Burma (Myanmar).

H*INT competed in the Night of the Champions hosted by CSTEP at Hofstra.  Night of the Champions is an event in which an organization could compete in “Minute-to-win-it” type challenges and earn points.  The winning team receive the Championship belt and of course the opportunity to be The 1st Champion.  H*INT’s participation was successful as they won the competition with a landslide victory.  Yesterday night H*INT concluded their last meeting with a Secret Santa Event amongst members, a great opportunity to bond and share the holiday spirit.  Like mentioned earlier H*INT is an organization for international students, but it is open to all! Next semester they have great things planned and are very welcoming to get new members to join! If interested check out their Collegiatelink page or come to the meetings on Tuesdays at 9PM in Room 145 of the Student Center. 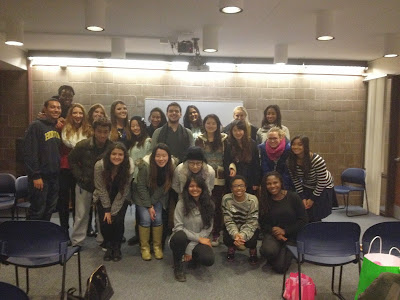 Posted by Kenny Cordero Rubinos at 11:57 AM