My experience as a 2012 debate lottery winner

I was 20-years old when I won the lottery. I was filled with emotions from the moment I found out I had won: anticipation, excitement, and luck. I was also slightly worried about the next step in collecting my prize, passing through the rigorous security checks. It was not a normal lottery I had won, there would be no large check to hold, no money awarded, and no long-distance relatives calling asking for favors. I had won the 2012 Presidential Debate Ticket Lottery at Hofstra University. 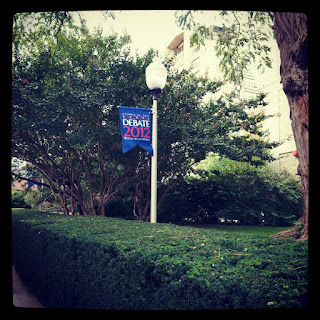 It all started when I found out that Hofstra University would be hosting its second presidential debate on October 16, 2012. The debate was being hosted in a “town hall” style which really piqued my interest because I felt that it was a true testament to the candidates’ debate skills. The debate also featured the incumbent president, Barack Obama. From the moment Hofstra announced it would be hosting the 2012 Presidential Debate, campus was buzzing. Suddenly classes that seemed to have little to nothing in common with politics or elections had relevancy to current events, the presidency, electoral history, etc. Students were buzzing with civic diligence and duty, encouraging others to register to vote, providing information on polling locations, and engaging in conversation about which issues were most important to them.

The debate brought students together despite differences. It was something that everyone on-campus was ready and eager to discuss. It was exciting to see so many people become so passionate about one common thing. I was also tremendously proud to be a part of the Hofstra community and to be a Hofstra student. I felt lucky to have such an important event hosted on campus and to see so much media coverage of Hofstra. Suddenly people were asking me what it was like to go to Hofstra, remarking how unique it was to be able to be a part of such a terrific university and how amazing it must be to be a part of this experience. 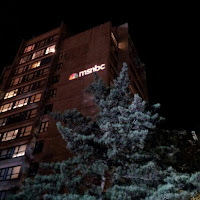 Flash forward a few weeks to debate time. I entered the ticket lottery after hearing countless rumors about how so many students would apply but so few would be picked. When the initial lottery had taken place, I checked my email hundreds (no, millions) of times, desperately searching for anything with the words “debate” or “YOU’VE WON!!!!!!”  As the news trucks and media outlets started pouring into campus, setting up in almost every parking lot on campus, my hopes started to fall. My boyfriend at the time entered the lottery too, but he didn’t receive the fabled “YOU’VE WON” email either.

The next day, I started hearing that students were receiving emails saying they were selected for the debate (after the first round of students was selected). I checked my email and what do you know, there still was not a “YOU’VE WON” email…but, there was one saying “Woo-hoo YOU ARE GOING TO THE DEBATE!” There it was in black and white (and red and blue in the debate logo…and yellow highlighting for the important parts). I was going to the debate! 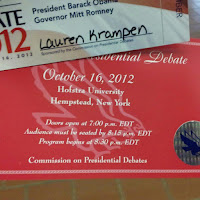 After carefully reading the email, I responded to ensure I would reserve my ticket. In true millennial style, I thought “OMG I’m going to the #Debate2012!!!” Then I tweeted, called my mom SCREAMING (sending her into a panic thinking something bad happened) and then called my boyfriend. If there was ever a thing that could have come between us, it was the fact that I was chosen to go to the debate and he was not. He was a political science major, which in his mind gave him more reason to go to the debate than me, an English major. After some icy discussions about how he should get to go, we agreed that I was super lucky to have this opportunity and I must seize it. (On a side note, we stayed together through the debate and we are now engaged).

Before I knew it, it was debate day (the most highlighted and circled day in my planner). I arrived at my assigned time to HofUSA to pick up my ticket. After waiting in line, I went inside to find a few people I knew to wait with. We all boarded busses bound for an off-campus credentialing location. While I was waiting in line for credentialing I spotted a few recognizable faces (John Kerry and a few other political figures). We boarded busses back to Hofstra and arrived at the arena. It was shocking to see so many media outlets, and more shocking to see famous reporters and commentators (sadly, I didn’t see Anderson Cooper). 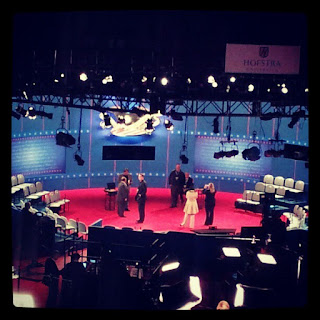 After all the excitement, everyone started getting settled into their seats. It was amazing to see the transformation of what I was used to seeing as a basketball court turned into a history-making debate stage. When the debate started and the candidates were on stage I wanted to pinch myself and find out if I was only dreaming. I was so amazed on what happens behind the scene out of the TV viewers’ sightline. It’s an incredible opportunity to see two candidates debate and to hear the media outlets commenting during breaks.

Once the debate ended, I walked out of the arena I was still in awe of the whole experience. There were still hundreds of media outlets lighting up campus with camera crews and students were bustling around discussing their thoughts. When I looked up, I saw Marine One whisking Barack Obama away.

I still consider myself incredibly lucky to have witnessed such a spectacle and even luckier to be part of such a great university that now has the opportunity to host another debate. Hofstra University will become the first university to ever host three consecutive presidential debates, a fact that makes me incredibly proud to be a student and graduate of Hofstra. 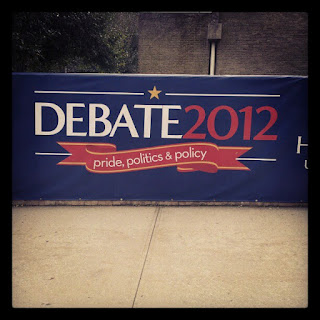