The Pride would fare better against Temple University to close out play on Saturday. In the first game against the Owls, the Pride would make a comeback in the third period to send the game into overtime tied, 9-9. Andrew Gagnon tallied 5 goals for the Pride, notching a hat trick in the second period. In overtime, Danny Correia would score on a pass from Nigel Grove to seal the 10-9 victory for the Pride.

In their third game of the day, and second against Temple, the Pride would carry over their flurry of goals, jumping out to a 3-2 lead after the first period. The Pride would shut down the Owls in the second period while extending their lead to four. Hofstra ended up with the sweep of Temple, beating the Owls by a final score of 8-5. Nick Lewis was named the first star of the game with two goals and two assists and Nigel Grove was named the second star of the game with one goal and two assists.

On Sunday, the Pride faced the Rams of Farmingdale State to close out the weekend. Hofstra’s Nick Lewis tickled the twine twice on the power play to give the Pride an early 2-0 lead after one period of play. In the second period, the Rams would come back and after two, the score was tied at 3. In a hard fought game, Farmingdale was able to come out on top, beating the Pride by a final score of 5-3.

Against the Huskies of Northeastern, the Pride would fare much better. In the first game, Ryan McCallen would help propel the Pride to victory by scoring two goals and being named the first star of the game. Hofstra beat Northeastern by a score of 6-5.

In the second game against Northeastern, Anthony Accardi and Shaun Randazzo would both score two goals and be named the first and second stars of the game, respectively. Richard Boudreau added a goal and an assist to be named the third star of the game and help the Pride beat the Huskies by a final score of 5-4.

Andrew Gagnon-Club Roller Hockey-Sophomore-Journalism-North Franklin, CT
Andrew helped lead his team to two huge wins over Temple University, totaling 8 goals and 3 assists in 4 games this past weekend, which included a 5 goal game in a 10-9 win in OT over Temple. Congratulations to Andrew! 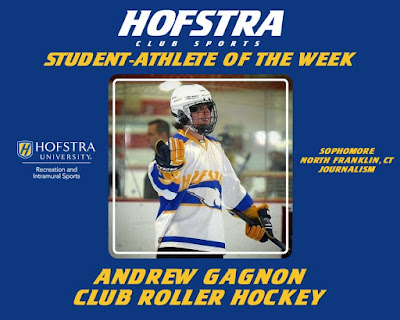 Posted by Shaun Fean, Associate Director of Campus Recreation at 10:19 AM