Women’s Club Lacrosse ventured to Storrs, Connecticut to take on Yale University and the University of Connecticut on Saturday, September 30th. In their first game of the day against Yale, Zoe Szczotka led the Pride with 2 goals, while Jessie Allendorf, Sabrina Michael-Duncan, Alexis Lott and Linnea Barbour also added goals, as the Pride beat the Bulldogs by a score of 6-4. Maria Lao locked down the net for the Pride with 11 saves.

In their second game of the day against the Huskies of UConn, Zoe Szczotka and Jessie Allendorf each scored 2 goals apiece, while Sabrina Michael-Duncan, Alexis Lott and Lauren Mastrianni all added tallies for Hofstra. However, the Pride would ultimately fall to UConn by a score of 17-8.

Club Ice Hockey opened their 2017-2018 season on Friday, September 29th at the Northwell Health Ice Center in Eisenhower Park, East Meadow, New York against the Stevens Institute of Technology Ducks. The Pride opened the scoring late in the first period with a power play goal by Captain Austin Natale, followed quickly by a goal from Darren Schwartz. In the second period, Nick Lewis and Joe Grice would add another two goals for the Pride, as Hofstra took a 4-2 lead into the third period. The Pride would add back-to-back deflection goals from Brandon Fauci and Austin Natale to help secure the 6-3 victory. To view the video of each period from this game, please check out the links below:


On Sunday, October 1st, the Pride traveled to the Prudential Center in Newark, New Jersey to take on the Ducks of Stevens Institute of Technology in the second game of the home-and-home weekend. Liam Hartenstein was solid in net for the Pride, allowing only one goal in the first period. The second period saw plenty of opportunities for Hofstra on the power play, but the Pride came away with only one goal from Darren Schwartz. Stevens would score a goal at the end of the second period to take a one goal lead. Despite a valiant effort in the third period, the Pride could not light the lamp and they fell to Stevens by a score of 2-1.

Billiards Club held their weekly match at the Raxx Pool Hall in West Hempstead, New York on Sunday, October 1st. Kevin Gomes and Hammad Imran both posted shutout victories, and Steve Jacobovitz also won his match. The Pride came away with a 9-4 victory.

Club Softball traveled to Kingston, Rhode Island to take on the Rams of the University of Rhode Island on Sunday, October 1st. The Pride would take 2 out of 3 to claim their first series victory of the season.

Women’s Club Ultimate Frisbee traveled to Princeton, New Jersey for the Jersey Devils Tournament on Saturday, September 30th and Sunday, October 1st. Hofstra put up tough fights in all six of their games. Hofstra was led by seniors Carolina Carrera, Maureen Oliva, Kellie O’Brien and Miranda Pasquarella. New additions to the team Angelea Francesco and Kiara Cornish both scored their first career goals in the tournament. Despite Hofstra only winning one out of their six games, the team considered it a great learning experience and positive step forward for the club.

Men’s Club Ultimate Frisbee hosted a ten-team tournament on the Hofstra Intramural Fields on Saturday, September 30th and Sunday, October 1st. Hofstra placed 6th in the tournament, with Frank Larkin standing out as a leader on the field.

Men's Club Rugby hosted the defending conference champion Sacred Heart Pioneers on Sunday, October 1st. For most of the first half, the score remained tied, but as halftime neared, Sacred Heart scored a try and converted an extra kick to take a 7-0 lead into the half. To start the second half, Sacred Heart would score 2 more tries before Hofstra would answer with a try by Ray Brown. Hofstra played with a lot of heart, but ended up falling to Sacred Heart by a score of 31-5.

Women’s Club Rugby hosted Fairfield University on the Intramural Rugby Field on Sunday, October 1st. The team played a solid game, making great strides from earlier in the season. Tries were scored by Dagny Arnardottir, Ashley Higby and Natalie Davis. Sophie Kabel added two conversion kicks. The Pride fell to the Stags by a score of 68-19.

Rock Climbing Club traveled to the original Brooklyn Boulders in Brooklyn, New York on Saturday, September 30th. It was another successful excursion for the team.

Men's Club Soccer hosted Columbia University under the lights at the Hofstra Soccer Stadium on Saturday, September 30th. Despite a goal by Eloumar Jalloh, the Pride would fall to the Lions by a score of 3-1.

Sarah El Bouzaidi-Club Softball-Junior-Health Science-North Babylon, NY
In this week's series against the University of Rhode Island, Sarah went a perfect 6 for 6 at the plate. She scored four runs, stole four bases, and added an RBI. As the leadoff hitter, her performance was crucial in setting the tone for the team's series victory over URI. Congratulations to Sarah! 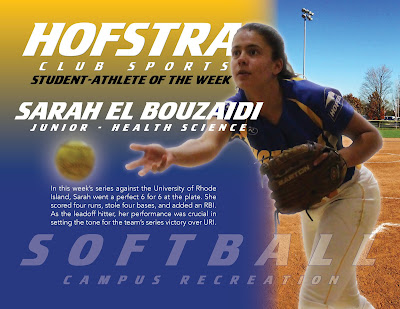 Hofstra’s 28 Club Sports are always looking for new members and welcome all experience levels.  If you would like to find out more information about joining one of our clubs, please visit hofstra.edu/recreation and click on the ‘Club Sports’ tab, or feel free to visit us at the Hofstra Fitness Center with any questions you may have!
Posted by Shaun Fean, Associate Director of Campus Recreation at 12:24 PM