Women's Club Lacrosse hosted the 2nd Annual Marc A. Sieben Memorial Tournament at Shuart Stadium on Sunday, October 8th. Hofstra took on Stony Brook to kick-off the day's festivities and came away with the win over their Long Island rival by a score of 15-9. Zoe Szczotka, Alexis Lott, Kelsey Picciano, Linnea Barbour, Maddie McDonagh, Alyssa Murphy, Mikayla Ruthig and Lauren Mastrianni all tallied goals for the Pride. Following the intercollegiate action, the Hofstra Alumni team took the field against the current squad. The Alumni were ready to go and beat the current team in a close game, by the score of 10-8. At the conclusion of the game, the team hosted a lunch for the players, alumni, family and friends to celebrate the life and influence of their late coach, Marc Sieben. 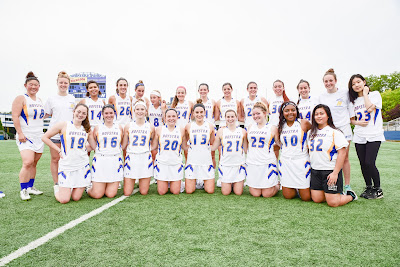 Club Crew traveled to Center Island, New York on Saturday, October 7th to race in a mixed 8+ at the Head of Oyster Bay Regatta. The team rowed away with the gold medal in their event with a 23:03 5K time. The race lineup was Kristin Kalish, Faith Renner, Laura Wood, Lauren McCarthy, Zach Cedar, Hannah Nathanson, Sophia Asofsky, Olivia Marine and Wendy Markert.

Women's Club Rugby traveled to Stony Brook, New York to take on the Seawolves on Saturday, October 7th. Behind 4 tries by Lili Madrid, 2 tries by Nat Davis and 1 try a piece by Samantha Dickie and Ashley Higby, Hofstra beat Stony Brook, 46-20. Sophie Kabel converted on 3 kicks as well. It was a great defensive effort by the Pride, as they were able to hold Stony Brook scoreless in the second half.

Club Baseball hosted Towson for a three-game series in Wantagh Park in Wantagh, New York on Saturday, October 7th and Sunday, October 8th. Stephen Locorriere got the victory in the first game, allowing only 2 earned runs and striking out 8, as Hofstra won 6-3. The offense was led by Steve Pekarik, Sean Cunningham, and Anthony Speelman. In the second game, Towson bounced back as their offense came alive against the pitching of Sean Cunningham and Steve Pekarik, as the Tigers claimed a 10-3 victory. The rubber match on Sunday was postponed due to weather.

Men's Club Rugby traveled to Schenectady, New York on Saturday, October 7th to take on Union College. The Pride came out dominating and overwhelming Union offensively, in rucks and in support. Tayab Kirmani led the team with 3 tries and was a force jackaling the ball as well as being astute in his defense. Josh Beck, Noel Shewaiatten, Devon Blair, Ray Brown and Aidan Woods all added tries for the Pride. Joe Ovile was exceptional helping to convert Hofstra kicks, going 4 for 6. The Pride came away with the victory, 67-0.

Club Roller Hockey traveled to Feasterville, Pennsylvania for the 20th Annual ECRHA Columbus Day Event from Friday, October 6th to Sunday, October 8th. The D4 went 3-1 in their 4 games, winning 2 games in shootouts over Stony Brook and Niagara. The weekend was capped off with a 3-1 victory over Farmingdale State. Ryan McCallen led the team in goals (5) and points (7).

Club Rock Climbing traveled to the Gravity Vault in Melville, New York on Friday, October 6th. The club had a fun night filled with challenging routes and some great climbers.

Men's Club Lacrosse hosted Fordham on Wednesday, October 11 at Shuart Stadium and fell to the Rams by a score of 9-4.


After going down with an early season injury, the senior captain made it her mission to get back on the field. In the Pride’s last game against Stony Brook, Liliana led her team to victory by scoring four tries, tallying nearly half of Hofstra’s points in their 46-20 victory. Congratulations to Liliana! 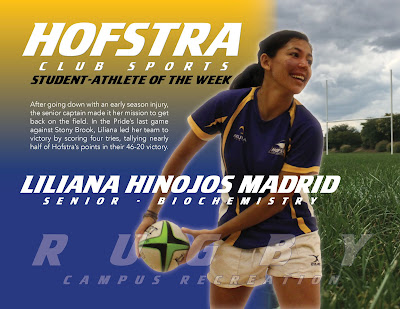 Hofstra’s 28 Club Sports are always looking for new members and welcome all experience levels.  If you would like to find out more information about joining one of our clubs, please visit hofstra.edu/recreation and click on the ‘Club Sports’ tab, or feel free to visit us at the Hofstra Fitness Center with any questions you may have!
Posted by Shaun Fean, Associate Director of Campus Recreation at 2:35 PM