The Pride next took on the Fordham University Rams under the lights at Shuart Stadium on Wednesday, April 18th. Despite a 10-5 deficit late in the second half, the Pride battled back and Mike Benvenuti was able to tie the game at 11 with 6 seconds left to play. The game headed to overtime, where Evan Vecchia was the hero for the Pride as he netted the game winning goal to give the Pride the 12-11 victory. With the win, Hofstra claimed the New York Metro Conference title and is headed to the playoffs. The team returns to action this Sunday, April 22nd in the 2nd Annual Joe Ferriso Classic against Temple and Quinnipiac at 12pm.

Club Men's Rugby traveled to Montclair State University on Sunday, April 15th for a tournament hosted by the Red Hawks. Despite dropping their first 2 matches to Marist College (19-5) and Rutgers University (17-5), the Pride were able to stave off elimination with a 10-5 win over Montclair State University. In bracket play, the Pride once again played Marist and in a much closer match, Hofstra came up just short, losing 21-17.  This forced Hofstra into a third-place battle against Rutgers University B-team.  Hofstra won 22-12 and placed 3rd overall in the tournament.

Club Quidditch competed at the Quidditch World Cup in Round Rock, Texas on Saturday, April 14th and Sunday, April 15th. The Pride fared well against the competition and came in 37th place out of 88 teams across the United States. Robbie Levinson was the star of the weekend for Hofstra, tallying three snitch catches.

Club Women's Rugby traveled to Portsmouth, Rhode Island on Saturday, April 14th and Sunday, April 15th to compete in the Beast of the East 15's tournament. The Pride fell to the University of New Haven 31-0 and Colby College 50-0.

Club Women's Soccer competed against Fordham University in the Bronx, New York on Saturday, April 14th. The Pride fell to the Rams by a score of 6-0.

Club Baseball traveled to Newark, Delaware on Saturday, April 14th and Sunday, April 15th to take on Delaware University in a three-game set. The Pride fell in all three games by scores of 10-6, 21-4 and 13-12.

Evan has demonstrated great patience and maturity on and off the field this year for the Pride. In Wednesday’s contest against Fordham, Vecchia netted the game winning overtime goal to give Hofstra a 13-12 victory and secure a New York Metro Conference title and playoff berth for the Pride. 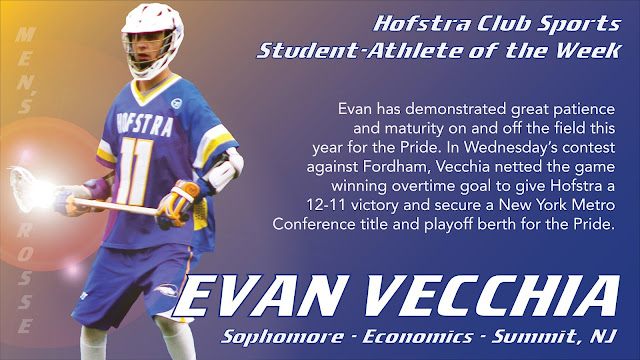 Hofstra’s 26 Club Sports are always looking for new members and welcome all experience levels.  If you would like to find out more information about joining one of our clubs, please visit hofstra.edu/recreation and click on the ‘Club Sports’ tab, or feel free to visit us at the Hofstra Fitness Center with any questions you may have!
Posted by Shaun Fean, Associate Director of Campus Recreation at 10:18 AM