Club Men's Lacrosse hosted the 2nd Annual Joe Ferriso Classic on Sunday, April 22nd at Shuart Stadium. In their first game of the day, the Pride took on #5 ranked Temple, losing on a last second goal by the score of 8-7. Hofstra would bounce back however, as they rallied from a 7-4 halftime deficit against Quinnipiac to win 8-7 in overtime on Mike Benvenuti’s second game-winning goal of the week. The event raised money for a scholarship in memory of former club member Joe Ferriso, who passed away in 2015.

Club Women's Rugby hosted their Gohring Tournament on Saturday, April 21st on the Hofstra Intramural Rugby Field. It was a great day for Hofstra's alumni to come back and catch up with one another as they honored the memory of their former teammate, Jessica Gohring, for the 9th year in a row.
Club Baseball competed against Drexel University at Wantagh Park in Wantagh, New York on Saturday, April 21st. The Pride were swept by the Dragons, losing by scores of 8-2, 15-0, and 15-5.

Club Volleyball traveled to the American Turners Club in the Bronx, New York on Sunday, April 22nd to participate in a tournament. The women’s competitive team fought valiantly, battling it out against former professional and Division 1 athletes, but narrowly missed out on advancing from pool play.

Club Billiards competed in the playoffs during their weekly match at Raxx Pool Hall in West Hempstead, New York on Sunday, April 22nd. The team lost their playoff match against the top team in the league by a score of 8-5.

Katie is a tremendous teammate and athlete. She helps keep the team motivated and is a force to be reckoned with on the field. Katie is known for skillfully scoring goals or knocking the disc out of the air. She always has a smile on her face and that positivity radiates on the field. 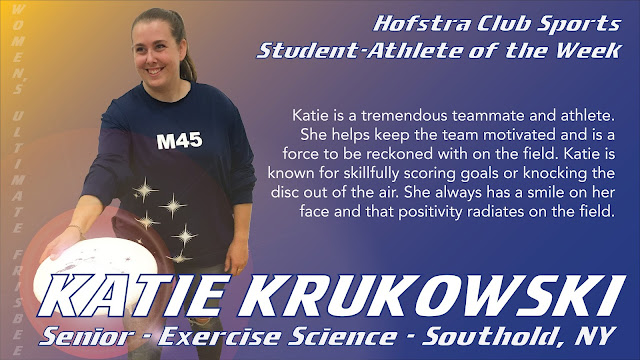 Hofstra’s 26 Club Sports are always looking for new members and welcome all experience levels.  If you would like to find out more information about joining one of our clubs, please visit hofstra.edu/recreation and click on the ‘Club Sports’ tab, or feel free to visit us at the Hofstra Fitness Center with any questions you may have!
Posted by Shaun Fean, Associate Director of Campus Recreation at 7:16 AM