We Got the Spirit! The 2011-2012 Spirit Support Teams are gearing up for an intense year of high-energy performances, new music, new routines, and of course COMPETITIONS! These past two weeks, Hofstra Cheer and Dance worked throughout their pre-camp on team builders and choreographing a competitive routine to take with them to their Spirit Camps in Scranton, PA. 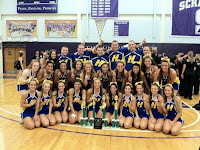 It wouldn’t be our Nationally-recognized teams if we didn’t take home some sweet prizes! Our Cheer Team made a clean sweep, three years in a row. After competing against teams like St. John's, Villanova, and Penn State, our Hofstra University Cheer Team took home first place in the chant competition, the cheer competition, The Game Day Award, and Most Collegiate/Leadership Award.

The Dance Team received all blue ribbons (the highest you can get) on the routines they learned while at camp; received a superior trophy, a program improvement trophy, and a Collegiate trophy for representing their University in an extremely positive way.
On the home front, the Pep Band is gearing up for an intense one-day Orientation program that will consist of blood, sweat and tears! Well, just kidding on the blood, but they will be participating in an intense team-building experience on campus followed by their first rehearsal featuring all new music for Fall Festival (September 23-25)! Keep your eyes and ears open because you’re in for a real treat come September 24th! Go PRIDE!