On Saturday, November 15th, Hofstra Quidditch traveled to Rochester, New York, to compete in the Northeast Regional Championship, a 25-team tournament. A near perfect opening day saw them defeat Clark University, Ithaca College, and three-year reigning champions, Boston University, leaving HUQ second in their pool. Day two began with a victory over UMass Amherst, which secured a World Cup bid for the Flying Dutchmen, and a trip to the quarterfinals. Hofstra next took on their cross town rivals, The Warriors, who clinched the win and a semi-final spot, concluding HUQ’s tournament with a respectable 6th place finish. 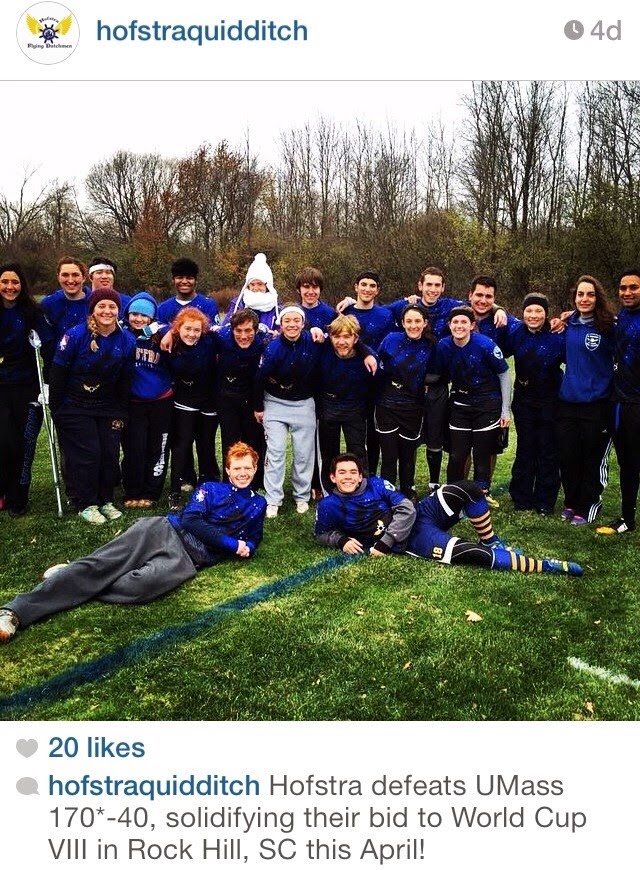 Hofstra Shooting Club had yet another successful outing on at Suffolk County Clays on Saturday, November 15th, meeting. All members improved on last week’s scores and two members even surpassed the 20/25 mark.


Hofstra Powerlifting Club had an extremely successful day on Sunday, November 16th, competing at Cross Fit Strong Island in Merrick. The competition consisted of 168 participants, who were categorized and then given three attempts to perform a squat, bench press, and dead lift. The Pride entered seven lifters, six of whom came first in their category (Taylor Acosta, Jailyn Gainey, Luci De Bakker, Zach Brunacini, Shawn Graves, and Chris Tingo) and one of whom earned second (Louis Ban).


Hofstra Club Ice Hockey had a rough weekend at the rink, falling to both Columbia and Fordham. The Pride will look to return to winning ways on Saturday, December 6th, when they will take on Columbia at Ice Hutch in Mount Vernon, New York.


For information on how to get involved with any Hofstra club sports, visit our website: www.hofstra.edu/recreation and click the ‘Club Sports’ tab, or stop by The Hofstra Fitness Center with any questions you may have.


See you next week!

Posted by Shaun Fean, Associate Director of Campus Recreation at 10:02 AM