What an eventful weekend the Nationally ranked Cheer and Dance team had—uh yes, I said Nationally ranked!
This past weekend Hofstra Cheer and Dance, along with some very dedicated families, friends, and alumni, traveled down to Walt Disney World, to compete in their respective annual Nationals competitions.
Since 2009, the Hofstra Cheer Team has been defending their number one, small coed, division 1 title and over the past TEN years, has won SEVEN national titles…no pressure! If videotaping was permitted, I would have highlighted for you just how loud over 50 family members and alumni can be, as we helped to project the HO-FS-TRA cheer in a facility similar in size to our Arena. Talk about school spirit—it’s truly a remarkable experience. 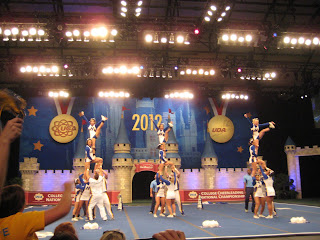 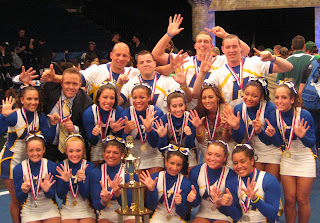 The Dance Team competes annually against other division 1 teams in both jazz and hip hop. This was their first year receiving a full-bid to compete at Nationals. That basically means that the tape they submitted to the Universal Dance Association (UDA) was so amazing, they paid for the team to travel to Florida to compete!
I knew from the minute this team opened our Class of 2015 Celebration during Welcome Week, that this year would be there year! Sure enough, the team came in 2nd in the nation in their jazz routine, and 1st in hip-hop, defeating their long time rival and defender of the title, the University of Delaware! 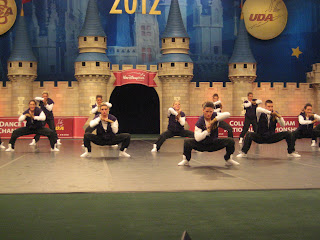 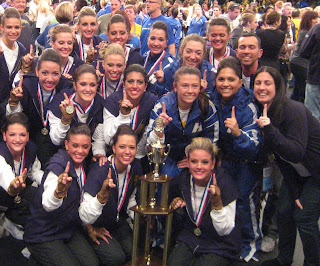 In addition, both teams competed at the first UCA/UDA World competition and also placed first! So the next time you attend a basketball game, you can take some serious PRIDE in knowing that two of your spirit teams are both NATIONALLY and INTERNATIONALLY number ONE!
Congratulations to Hofstra Cheer and HUDT for an outstanding job representing our university this weekend. I am so proud of them!
Posted by Jaclyn Congello-Vento at 2:17 PM