Are you a Hofstra Human or a Zombie? 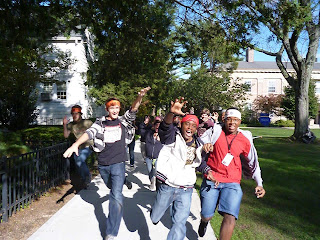 Where were you last weekend when Hofstra humans took on campus zombies?!?!?! This is the third semester that Hofstra vs. Zombies has hosted this active 4 day long event on campus. One hundred student participated in the event and one was named the Original Zombie. After two days of haunting the campus to gain zombie numbers the Zombie group was off to hunt for human players around campus. I saw them everywhere - late Friday afternoon at the commuter lockers, walking around North campus and even stopping to get lunch at California Pizza Kitchen. This is one of my favorite blossoming campus traditions and hopefully you will be able to get involved with the club and play next Spring's game (tentatively set for March 21-25, 2012). If you want to know more about getting involved or how to Join Hofstra vs. Zombies club you can also stop by the SGA / Lion's Den Haunted House this weekend (Saturday 6pm-11pm) in Roosevelt Hall where HVZ will be continuing to haunt the campus community!
Posted by Unknown at 11:26 AM