Do you know your Gay Point Average? 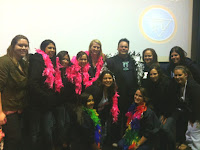 Last night many students (including almost 100 Fraternity and Sorority members pictured here are members of Phi Sigma Sigma sorority) came to hear Shane L. Windmeyer speak about LGBT issues on college campuses. Six straight students from the crowd were given the opportunity to answer questions to find out what their "Gay Point Average" was. The crowd learned a lot including one question that no one on stage got right about the scale that describes sexuality from 0 - 6 (0 being exclusively heterosexual and 6 being exclusively homosexual) which was......The Kinsey Scale and a question that almost everyone answered with 100% accuracy - what are the colors of the Gay Flag which is (ROYGBV)! It was a great turn out and I think everyone in the crowd learned something (I know I did) about the LGBT community and how as straight members of the community we can be a better ally!
LGBTQ History Month kicked off on the 28th of September with a keynote by Faisal Alam and will continue through the end of October. I hope to see you OUT at many more events this month. And as Shane said last night "Just because you have the right to do something doesn't mean it's the right thing to do!"
Posted by Unknown at 9:08 AM