My Travels to Turkey

Istanbul. It’s the New York City of Turkey. As my first trip abroad, I felt right at home in the great big overcrowded city.  But, it was far from what I was used to. There were no enormous skyscrapers but instead a beautiful view of the sea and landscape. 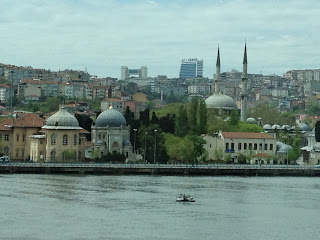 A shuttle bus dropped me off at conference and I did not know what to expect. As I pulled up, there was a sea of diverse women outside the building. There were around three thousand participants attending the conference, ranging from twelve to ninety years of age, from about a hundred different countries. It was a complete cultural shock. Just being surrounded by other cultures, other languages, and other ideologies really opened my eyes to the challenges of the world and the commitment to the common thread of empowering women these participants share. I was attending the Association for Women’s Rights in Development (AWID) conference from April 19-22. AWID is an international, feminist organization that is dedicated to achieving and maintaining sustainable development, gender equality, and women’s human rights. This year’s forum was aimed at exploring the impact of economic power on women and the planet by facilitating relations between diverse women, organizations, and groups working on key issues of human rights and justice. The forum was a process and had a tremendous effect for local, national, and global initiatives. Through a series of in-depth sessions, plenary sessions, breakout sessions, and artistic/cultural sessions I was able to acquire a greater understanding and knowledge of the vast opportunities and setbacks to women world-wide and the possible solutions that would strengthen the global world. 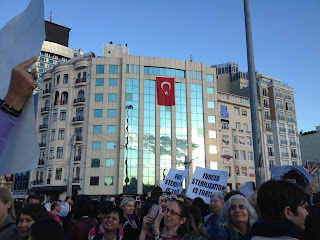 There were upwards to 18 sessions being held in one time period and it was difficult to choose between so many interesting topics. The forum really made sure to encompass all aspects of the challenges faced by women such as the environment, access to resources, religious practices, etc. The first session I attended was on unpaid care work, work that is predominately completed by women and taken for granted. The speakers provided an in-depth analysis of the negative economic implications that accompanied unpaid work. It really made me realize the benefits I am entitled too because many young girls are responsible for care work and therefore deprived of their education, being forced to drop out or take on additional work in addition to unpaid care work.

I spontaneously walked into a session on the second day called 7 Hours and 55 Minutes: Exploring money and work in sex work. The goal of the session was to unpack the myths of sex work and acknowledge it as real work women do. I really enjoyed this session because instead of showing videos or listening to intelligent, powerful women speak about the issue, the speakers took an interactive approach. They transformed their session into a game, where we as audience members where able to participate in the daily life of a sex worker.  Selected from the audience were participants who played various roles as sex workers, customers, a doctor, a social worker, a hotel owner, and other important people and professions involved in the daily interaction of sex workers. It was like a board game, where a member of the audience rolled dice; depending on the space the sex worker landed on their received a card or a customer. A customer allowed the sex worker to be paid while the cards described typical negative encounters that forced sex workers to pay. For example, one card described how it was common for brothel owners to refuse a sex worker to leave for a restroom break; as a result, the sex worker ended up with an infection and being overcharged for medication. In a funny way, it explained how sex work produced negative connotations and implications for workers. It really challenged me to rethink the word prostitution and instead envision the factors that force these women into this type of work. After the session, I had the opportunity to actually speak to a sex worker from Thailand, who was just like any other worker, such as a lawyer or entrepreneur. She explained that the lack of job opportunities did not offer her enough pay to provide for her family and she choose to go into the field that provided stability and a generous income to her and her family.

It’s so difficult to pick a favorite session or topic, as all sessions address pressing issues that must be confronted with change. I attended the very inspiring session Visioning Cultures Free of Violence. It examined the idea of culturally justified violence that intrudes on the private and public lives of women. All women experience violence differently but the common theme is the control of women’s bodies. In order to help victims of violence cope a group devised a method through digital storytelling. It started with a group of women, who were trained by professionals on how to you media to tell their story of violence. There were several videos shown, each inspiring, emotional, and touching in its own way. It was difficult to watch because there was so much pain and suffering these women encountered; but the tremendous improvement and empowerment these women made impacted the lives of thousands more women by going on to teach and train other victims.

Check back for more about my trip to Turkey.
Posted by Kerri Tortorella, Director of Communications/Student Affairs at 9:51 AM

Email ThisBlogThis!Share to TwitterShare to FacebookShare to Pinterest
Labels: Turkey