My Travels to Turkey- Part 2 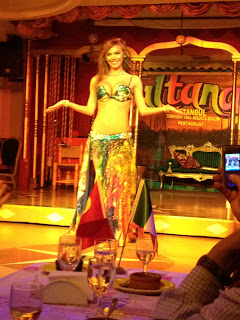 While my main purpose for traveling to Istanbul was to attend the conference, it was impossible not to explore the breathe-taking city; I was eager to discover the historic city and their culture. I was a bit worried at first because I had arrived all alone and did not want to go out alone in a foreign country. Thankfully, I met wonderful people at the conference, who invited me to go out with them. With such limited time, a group of us decided it was best to visit the main attractions of the city.  Istanbul is known as the home of belly dancing and it is one of the great sources of pride.  So it came as no surprise when all of the locals described Sultana’s dinner show as a must see. It was a Turkish restaurant that included cultural shows, belly dancing, music, and great Turkish cuisine. What better way to experience the city and culture? It combined music and dance from all different regions of Turkey. My favorite was a quirky and funny dance from southern Turkey known as “Aşuk Maşuk,” where two men wore costumes that used the stomach as the face that depicted a boy chasing after a girl he adored. The show was well worth it, as it lasted for five hours and I enjoyed every minute of it. At the end of the show everyone in the restaurant was welcome to join the performers up on stage to dance, which of course I did. It was an unforgettable night of great Turkish delight.

On the other hand, what is Istanbul without experiencing their religious side? Turkey, particularly Istanbul, is known for their mosques. There was literally a mosque every few blocks. During prayer time a loud siren would sound over the city and their prayer would begin being said over the speaker.  To understand their religion I visited the Blue Mosque early morning of the fourth day. The Blue Mosque is a popular tourist attraction and one of the well-known mosques in Turkey. I was in awe at the great architectural beauty and intricate detail. While I was there, I was also able to travel directly across to the Hagia Sophia, once a mosque and now a museum. Lastly, the Grand Bazaar was a must for tourist. It was really close to my hotel and I was able visit it two nights I stayed, but was still unable to see it all. It has over 4,000 shops, which range from jewelry, hand-made ceramics, carpets, spices, and food. It provided me with a taste of Turkey, where there was something for everyone. Although it reminded me of New York City, I quickly realized it was far from it as everything was reasonably priced and it is considered rude not to bargain with the shop.

Reflecting on my experience, words cannot express the amount of knowledge, tolerance, and understanding I took away from it. Just by talking with participants, I was able to learn just how different my life experiences are from theirs and how lucky I am to live the way that I do. Although I was warned beforehand that I may be looked at differently because I come from a privileged country and background, I was greeted with nothing more than warm-welcomes and acceptance.

Posted by Kerri Tortorella, Director of Communications/Student Affairs at 2:38 PM

Email ThisBlogThis!Share to TwitterShare to FacebookShare to Pinterest
Labels: Turkey