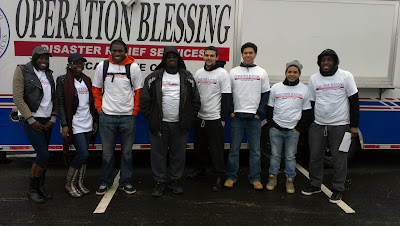 This past Saturday, February 23rd as a part of the Office of Student Leadership and Activities' (OSLA) Serve with PRIDE series myself and ten Hofstra students got up early and climbed onto a big yellow school bus unsure of what the day would bring us. In late October, Superstorm Sandy devastated our local Long Island/NYC community and we have made it a priority to help our neighbors. We rode to Breezy Point in Queens on that wet and cloudy morning ready to lend a helping hand to anyone who needed it. As we arrived to the tent of non-profit organization Operation Blessings we met Sheila and Andy who described to us what their organization does. This natural disaster relief group has been camped out in Breezy Point since Superstorm Sandy hit the neighborhood and it was the last Saturday that they would be there. 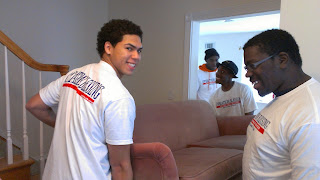 Sheila handed us two projects in two different homes and we walked in the snowy rain to our locations. The first home belonged to a young man and his mother. The home was slightly lifted off the ground and inside all of the walls and floors were boarded. The students at this site helped pack up his mother’s wedding crystals and father’s war medals so that mold would not ruin them. He described how he watched his neighbors’ homes just float away as he stood knee deep in water in his living room. 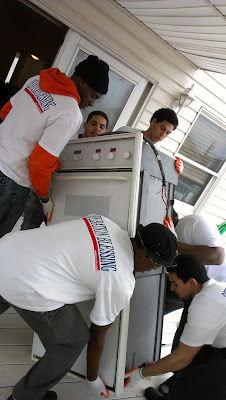 The next home was the home of an elderly woman who needed help reorganizing her home in order for her to finally move back downstairs. All her belongings have been upstairs where she has been living since the storm hit. The student’s lifted furniture, played the piano, and listened to her prized record player as they placed it back over the piano shelf. 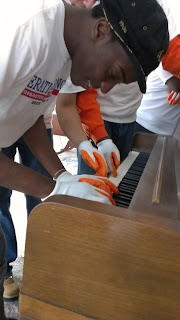 At the end of the day, we helped Operation Blessing pack up their trucks to head down south and help the victims of Hurricane Irene. As we drove away exhausted but feeling a sense of great pride, we were still able to see homes that were falling over and the quiet playgrounds buried in sand. The devastation is still very apparent in Breezy Point and we hope to go back soon. 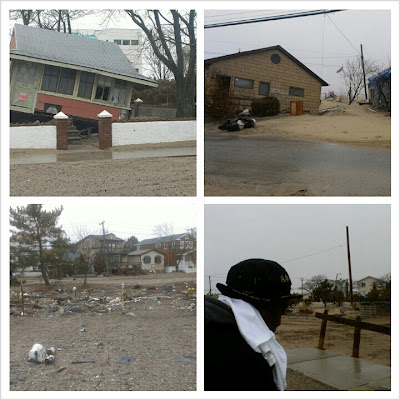 Are you a Hofstra student who wants to help provide relief to those still in need affected by Superstorm Sandy? Then dedicate your spring break to do just that by participating in OSLA's Alternative Spring Break Stay-cation program. For more info email: OSLA@hofstra.edu.

The Office of Student Leadership and Activities hosts various service projects throughout the year. To learn about upcoming Serve with PRIDE series projects visit: hofstra.edu/service.