She’s the First is a national nonprofit that raises money for girls in third world countries who can’t afford an education, ultimately allowing them to be the first in their families to graduate. STF*{Hofstra} is a campus branch of them. Each year, our organization grows more and more in terms of member outcome, campus awareness, and money raised. It’s humbling just how far we come. 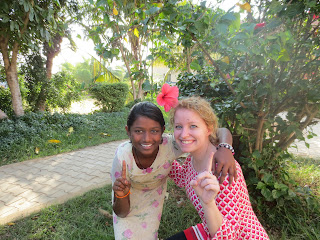 Among our success was last year’s Dance-a-Thon. It was a huge hit that exceeded our expectations. Being that it was the first time, the club aimed for a relatively low goal of $900. You can imagine our surprise and excitement when the night ended and we counted a total of $1200. To put that into perspective, it costs $300 to send a girl to school for a year. In just six hours, we managed to send four. But the success of the evening didn’t stop there. As the school year came to a close, we were awarded “Most Politically/Socially Active Club of the Year,” as well as “Community Service Event of the Year” for our efforts, not just as the Dance-a-Thon, but throughout the entirety of both semesters. We were also awarded “Most Money Raised” of any chapter across the country. It’s safe to say that our branch is causing a stir even outside the Hofstra walls. 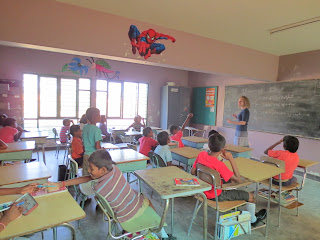 So, with success like that, we made a decision: to host another Dance-a-Thon in spring 2013. This time around, we want YOU to be a part of the worldwide push for girls’ education. I’ll tell you why.

This past winter, I traveled outside of the country for the very first time (not counting Canada). I got on a plane by myself and touched down in the most underdeveloped part of India – three hours south of Bangalore. Scared, alone, anxious, and overwhelmed, I repeated the same thing over and over to get me though the mix of emotions: You’re doing this for the She’s the First girls. It didn’t mean as much traveling to the Shanti Bhavan School as it did leaving. And that’s because when I finally met them, I realized why I have done all that I have. These girls are the happiest, smartest, most beautiful, inspiring, wonderful ones I have ever met. That’s not an exaggeration.

The moment I met them and told them I was from She’s the First, their smiles got wider (if that’s even possible) and they welcomed me, quite literally, with open arms. There, I was home. 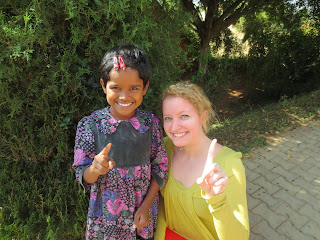 At Shanti Bhavan, it’s not all tie-dye cupcakes (our signature fundraising tool), teal, and magenta (the STF colors). It’s tough. It’s reality; their reality. Each year, a few administrators at the school head out into the slums of India, in search of the most promising students. They give them aptitude tests and the ones who do best are invited to attend. If their parents agree, they’re taken from their homes at age four, brought to school, and raised, taught, and molded until they graduate high school. They see their families just twice a year.

I can’t imagine a parent being willing to let their child go for that long. But when you put yourself in their shoes and you live their life – their life without sanitation systems, homes, food, clothes, money, shoes, beds, anything – you realize why. They want a better life for them. They want to take themselves out of the “Untouchable” caste and prove that just because they’re poverty stricken, doesn’t mean they should be any less entitled to an education, or job.

The hardest part of my trip wasn’t showering in a bucket, or sleeping with spiders crawling on the ceiling, or eating rice and curry each and every day, or lesson planning, or the painfully early mornings. It was leaving Shanti Bhavan. It broke my heart to stay, and it broke my heart to go. 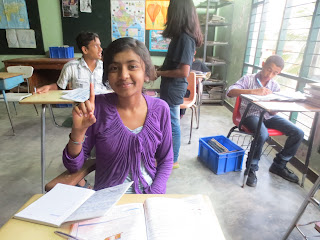 As I sat restless on my flight back to the U.S., I sobbed to myself. I couldn’t believe the people I had met, the experiences I had been through, and just how much I missed every single face I saw. It was hard accepting that I had to let it all go and come back to reality. But as I read through the students’ sweet notes and pictures to me, I knew what I had to do. I had to plan the second annual Dance-A-Thon and I had to plan it for Shanti Bhavan.

So this year’s event is for them. For their strength, their courage, and their will to truck through the homesickness, the monotony, and the challenges that come with getting an education. If there’s one thing we can do, it’s raise money to make that a bit easier for them. Besides, one of their favorite things to do is dance so really, there’s nothing better we could be doing. 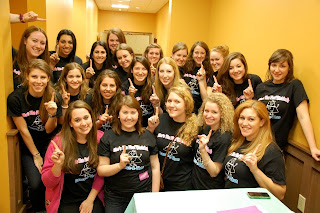 The aim of the Dance-a-Thon is for each team to have one of their members on the dance floor at all times. It seems exhausting, but each hour there is a ten-minute break where dance and a’capella groups from around campus perform to give the dancers a break and some motivation. This year the clubs are encouraged to get even more involved by having a team poster which they’ll create the night of, and the best outfits which they can coordinate beforehand. STF is also awarding prizes to the “Best Male Dancer,” “Best Female Dancer,” and many more. We’re also asking that each team hold an additional fundraiser at their table to help bring in even more funds. Whichever team raises most gets to keep half of whatever they raise.

If you’d like to make a team, email CTIRRE1@pride.hofstra.edu. You don’t have to be a part of an organization to make a team; it can just be your friends, your staff, whoever. It’s also only $5 per person. You can purchase your wristbands in the atrium the Monday and Tuesday of the Dance-a-Thon or at the door. You can find our event on our Facebook page, facebook.com/stf.hofstra or on Twitter @STF_Hofstra, #DanceSTF. We look forward to seeing you there!