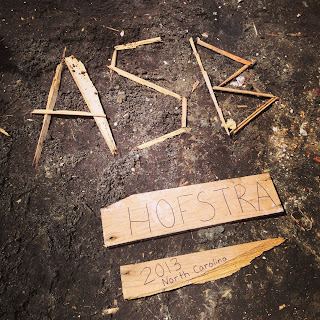 Today was probably the most rewarding day we’ve had thus far.  It was also the saddest day, because it was our last day of service, and the unforgettable experiences we’ve had, have left us wanting more. In gorgeous weather, the members of our ASB team began by splitting into two separate groups. The first group was sent to clear out neglected items of our previous site’s former occupants (while dirty, was a positive experience!) so that the remaining students could move on to the larger task of demolishing the third and final site. The first group joined them a few hours later.
Along with our neighbors for the week, students from the University of Delaware, we tore down an already-standing house in less than 6 hours! In amazement at witnessing the bulldozer collapse the structure, we gathered our tools and got to work. No one person was in charge as we were all novices in the practice of deconstruction.  However, as a team, we knocked down drywall until there was nothing remaining but the frame.  By the end of the day, the work site was completely cleared!

Below is a picture timeline of all that we accomplished today!


Special moments of the day included lessons in “humility and flexibility.” Amanda, a local camp counselor whose program was destroyed by Hurricane Irene, helped us place a face with the situation. She explained to us the sites we are working on are in a depressed section of town, and that we were not only tearing down condemned structures, but rebuilding the community. Her gratitude for all we have been doing was humbling.

The fulfilling aspect of our service is not just in changing a situation, but in inspiring those affected by it. During Amanda’s speech, she thanked us for our loud cheers, which she could hear from her porch (unbeknownst to us) and claimed lifted the hearts of her neighbors. See the link below!

After three full days of challenges, we could not have asked for a better trip. Not only have we seen a change in Bayboro, North Carolina, but we’ve seen a change in ourselves through teamwork and bonding. Between helping others as well as one another, we have a full concept of why we choose to do service work. Coming together for a common good and realizing that the smallest thing can brighten someone’s day is a true gift.


Blog written by:  Jeanine Russaw, Class of 2015 and Julia McGuire, Class of 2016
Posted by Ashley Gray, Assistant Director in Student Leadership and Activities at 8:09 AM