Radio Hofstra University (88.7 FM WRHU) enters its fourth season as the flagship station for the New York Islanders, with a new twist.  In addition to airing on 88.7 or online at wrhu.org, 103.9 FM WRCN will be syndicating all 82 games, with a signal strength that stretches across all of Suffolk County, forming the Radio Hofstra University Islanders Network.  On all networks you’ll hear the same student-produced content, along with Chris King as the radio voice of the Islanders.  As the Sports Director at WRHU, I get the rare and rewarding opportunity to be one of three student color commentators for the upcoming season. 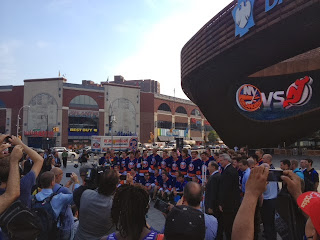 I arrived on campus at Hofstra University three years ago with a generic idea that I liked sports, and that Hofstra had a pretty good sports broadcasting program at the campus’ radio station.  I went over to a place called “Dempster Hall” (now call the Lawrence Herbert School of Communication) as an innocent freshman who had never broadcasted a single thing in his life.  At WRHU, the process to get involved can be strenuous (it includes an application, interview, selection for a semester long training class, and then the class itself), but I eventually got accepted into the class and into the station at the end of my freshman year.  Three years later I’m sitting high atop the Nassau Coliseum looking down on center ice, preparing for my first broadcast. 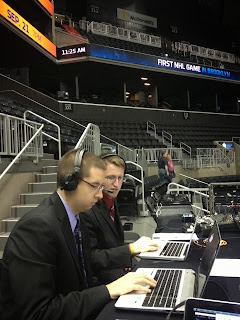 My first game was this past Saturday as New York faced Columbus in their home opener.  Too look around and see sixteen thousand fans below was an intimidating, but a worthwhile sight.  As a broadcaster it’s always better to do a game in a packed house, with excited, attentive fans.  It adds to the listener experience if they can picture what the building feels and hear what it sounds like.  I can’t wait to experience it for a whole season. It’s incredible to think that while in college I’m a professional NHL broadcaster, something I thought would never actually become a reality.  It’s only been one game, but I’m going to cherish every single moment I have for the rest of the season.

Make sure to tune in on 88.7 FM, 103.9 FM, or wrhu.org on every game night this season, and follow @WRHUSports on Twitter for all the latest news on the Radio Hofstra University Islanders Network.