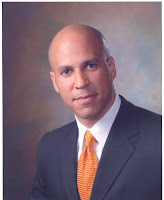 Two-term Mayor of Newark, New Jersey, Cory Booker, will be kicking off “Debate 2012: Pride, Politics and Policy” when he speaks to the Hofstra community as part of the second annual P.R.I.D.E. Week on Wednesday, February 29, 2012 at 11:15 a.m.-12:45 p.m. The event will be held in the Helene Fortunoff Theater in the Monroe Lecture Center. His speech, “Changing the World with Your Bare Hands,” aims to empower people to take action and be of greater service. There will also be a Q&A session so come prepared with questions!

You must RSVP to attend. Space is limited and will fill up fast! To register now, visit www.hofstra.edu/CoryBooker.

About Cory Booker
Mayor Booker’s career began in 1998, after serving as Staff Attorney for the Urban Justice Center in Newark. He then continued his career as Newark’s Central Ward Councilman. During his years of service, then-Councilman Booker earned a reputation as an innovative leader willing to take bold action to effect change. For his work, he has been recognized widely, including, among others, TIME, Esquire, New Jersey Monthly, Black Enterprise (naming him to the Hot List, America’s Most Powerful Players under 40) and The New York Times Magazine. For more information about Mayor Booker visit www.corybooker.com

Join Student Affairs and the Political Science Department on Tuesday, February 28 starting at 6:30 p.m. in the Mack Student Center Theater for the showing of the Oscar-nominated documentary, “Street Fight,” that chronicles the contentious 2002 mayoral race in Newark, which pitted Mayor Booker against incumbent Sharpe James. Professor Rosanna Perotti will present an introduction to the movie and set the context for that election.

Posted by Kerri Tortorella, Director of Communications/Student Affairs at 12:45 PM